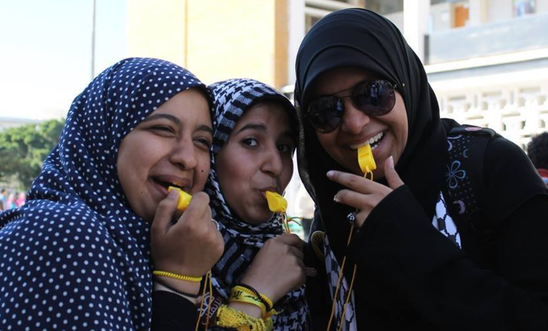 On 21 May 2014, three women – Menatella, Abrar and Yousra – were peacefully protesting at their university in Mansoura, Egypt. For this, they were arrested and locked up on false charges, including ‘thuggery’, facing years behind bars.

The three women were prisoners of conscience, jailed purely for exercising their rights to freedom of expression.

Locked up and silenced

What began as a peaceful demonstration against the new protest law on 12 November 2013, soon turned into violent clashes between supporters and opponents of the Muslim Brotherhood.

The three women sought safety in a classroom in the pharmacy faculty.

Eyewitnesses and university security testified that the three women had not been involved in the violence.

The women were not in court to hear the verdict and only found out their fate four days later. They were then held at Mansoura’s Public Prison ever since, where they were only allowed a five-minute visit with their families per week.

On 12 April 2015, the women had their convictions overturned by Egypt's highest court. The decision means that the women will now be re-tried.

Mansoura University students Abrar Al-Anany and Menatalla Moustafa were finally released from prison on 15 November. The two women were released after completing their prison sentences.

Just days after their release, on 18 November, a criminal court retried their case and acquitted them, along with teacher Yousra Elkhateeb.

While Abrar Al-Anany and Menatalla Moustafa are now free, Yousra Elkhateeb remains detained while she serves a prison sentence handed down in a different case.

Last November, Egypt introduced a protest law to suppress criticism and opposition. All public gatherings with more than 10 people need a licence. If you apply – you will likely be refused.

This law poses a grave threat to freedom of assembly and gives security forces a free reign to use excessive, and even lethal, force against demonstrators.

Almost 2,000 of you took action for the Mansoura women. The mother of Menatalla Moustafa told us:

'We are grateful for Amnesty's work on the case from the beginning and the ongoing follow up. We wish you the best in all your good and amazing work and may God bless you and everyone in the organisation. What you are doing is great and we wish you all the success with your esteemed goals in improving the lives of many.'