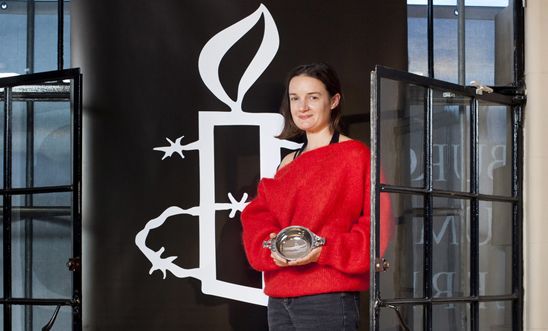 A Girl is a Half-formed Thing actress Aoife Duffin, winner of the 2016 award © Amnesty International

The 2016 award was won by A Girl is a Half-formed Thing, brought to the Traverse Theatre by The Corn Exchange theatre company. The play is acted by Aoife Duffin, who brings multiple characters to life in a fearless story of one girl's upbringing in Ireland.

"A Girl Is A Half-Formed Thing is an incredibly powerful piece exploring the long-term impact of child abuse and rape. The subtext of the misogyny that is at the core of violence against women is powerfully driven home. It was a worthy winner from a shortlist of inspirational, political, topical, and beautifully realised theatre."
Naomi McAuliffe, Amnesty Scotland Programme Director

Our annual Freedom of Expression Award honours an Edinburgh Festival Fringe theatre production of excellent artistic merit that builds understanding and raises awareness about human rights in an inspirational way.

All entries are reviewed by Amnesty Ambassadors and a panel of professional theatre critics.

Read more about these productions

Our panel have longlisted 71 productions they feel are inspiring audiences to think about human rights issues at this year's festival.

Cuckooed should be compulsory viewing for everyone in the UK. The show raises timely and very important issues including the erosion of our right to privacy and democratic activism without interference from the state. Ultimately it celebrates freedom of expression - the very reason we created this award.