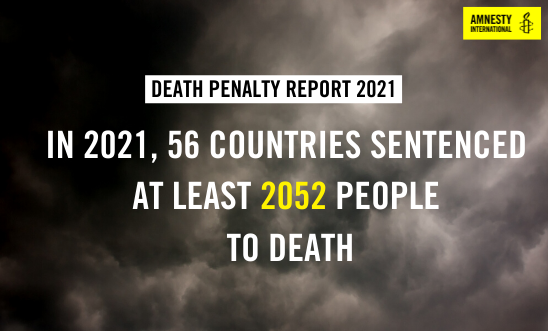 Global use of death penalty up by 20%

Last year saw a worrying rise in executions and death sentences in some countries after earlier Covid-19 restrictions were removed from courts.

Amnesty’s Report, Death Sentences and Executions 2021, is an authoritative annual survey on the death penalty and shows that at least 579 executions were known to have been carried out in 18 countries last year⁠, a 20% increase on the recorded total for 2020⁠.

As in previous years, the data does not include the thousands of people Amnesty believes were executed in China, as well as the significant number of executions thought to have taken place in North Korea and Vietnam. State secrecy in these countries make it impossible to accurately monitor executions. Amnesty’s report also emphasises that some of the figures should be regarded as minimum figures.

One disturbing trend was the effect of a lifting of earlier Covid-19 restrictions on judicial buildings including courts in various countries. With these steadily re-opening during 2021, judges handed down at least 2,052 death sentences in 56 countries - almost 40% more than in 2020. Overall, by the end of last year at least 28,670 people were under sentence of death around the world.

However, Amnesty’s report also shows that an underlying long-term trend toward reduced use of capital punishment continued during 2021, with the yearly death toll of 573 making it the second-lowest (after 2020) recorded by Amnesty since at least 2010. In the USA, 2021 saw the lowest number of executions (11) since 1988, while Virginia became the 23rd state - and first southern state - to abolish the death penalty, and the Biden administration established a temporary moratorium on federal executions in July.

The minority of countries that still retain the death penalty are on notice: a world without state-sanctioned killing is not only imaginable - it is within reach and we will continue to fight for it. - Agnès Callamard, Amnesty International’s Secretary General

Read the full report below.