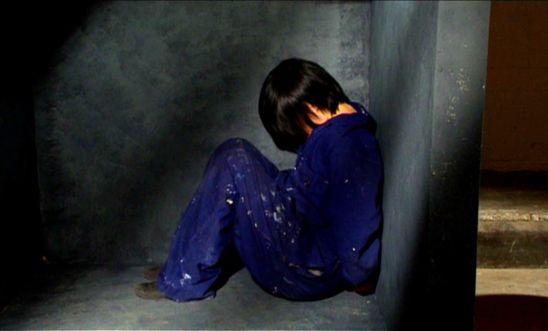 Simulation of a solitary confinement cell in North Korea © Amnesty International
In April 2013 nine young people aged 14-19 came together to escape the tyranny of North Korea. They fled across the border to China and made their way to neighbouring Laos. There, just weeks after their brave escape, they were arrested for illegal border crossing and forced to return.
A month later they appeared on a state television saying how ‘pleased they were to be rescued and returned to North Korea’ from their South Korean abductors.
Today, two of them are assumed dead, executed by the state for their actions. The other seven are thought to be languishing in the notorious Camp 14 – where they are likely to be tortured, starved and forced into hard labour.

Forced returns: an all too common practice

In North Korea, where even law abiding citizens risk severe punishment at the hands of the state, defectors are given the very harshest of punishments.
Yet China continues to send them back. In September the authorities forced four families, including a one-year-old baby back, putting them at severe risk of torture, labour camps and possibly death.
Now Laos - a country that had previously detained undocumented North Koreans but eventually allowed them to travel to South Korea - seems to be following suit.
We are working to expose this practice, calling on all countries to ensure North Koreans are given refugee status.

Refuge is a human right

North Koreans are not allowed to travel abroad without state permission – an act viewed as treason and punishable by death.

Despite the risks if they are caught, many people do cross its borders every year in the hope of escaping the oppressive regime.

It is against international law to return someone to a country where they are at risk of persecution, torture or death.

However, China considers all undocumented North Koreans to be economic migrants, rather than asylum-seekers, and returns them to North Korea if found.

We have been clear on this from the outset – asylum-seekers must not be forcibly returned to North Korea, where they could face enforced disappearance, execution, torture or other ill-treatment.

All North Koreans in China, Laos or anywhere else, are entitled to refugee status because of the threat of grave human rights violations if they were to be returned – and all countries must adhere to this.

We also want China to give the North Koreans access to the UN refugee agency, the UNHCR.