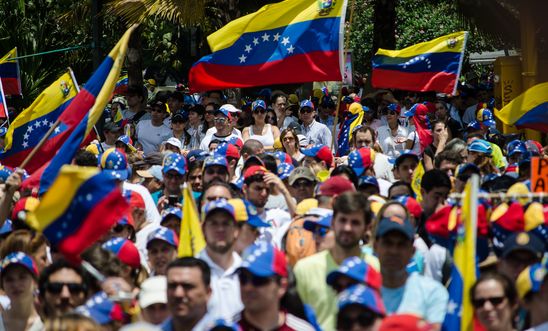 More than 37 people have died during two months of rival demonstrations by opponents and supporters of the government of President Nicolás Maduro.

Thousands of people have been detained by security forces.

The arrest of a prominent opposition politician on charges of ‘civil rebellion’ and ‘conspiracy’ has led to fears of a witch hunt against opposition leaders.

We believe that unless both the authorities and the opposition respect human rights the violence will get worse.

Despite being one of the world’s biggest oil producers, Venezuela suffers from severe shortages of basic goods and foodstuffs. President Maduro has attempted to rein in a 56 per cent inflation rate with statutory price controls, but this seems to have made the problem worse. Oil money and the drug trade have contributed to rampant corruption and one of the worst violent crime rates in the world.

Anti-government protesters call the demonstrations of the past few weeks the ‘Venezuelan Spring’. But the president still enjoys much support from Venezuela’s poor, who worshipped his predecessor, the populist Hugo Chavez, who died a year ago. Like Chavez, Maduro claims that the opposition are ‘fascists’ acting at the behest of a wealthy elite. But, lacking Chavez’s charisma, his support is ebbing away – while the country’s economic and social problems only seem to get worse.

The violence of clashes between security forces, pro-government groups and anti-government protesters is escalating. Official sources have reported at least 37 deaths, including six members of the security forces, and more than 460 injuries. At least 2,000 have been detained, although most have been subsequently released. The fear is that increasing government repression will lead to more violence on the streets in an ever-worsening pattern. On 19 March Daniel Ceballos, mayor of the city of San Cristóbal, a member of the opposition party Voluntad Popular, was arrested by the Venezuelan Intelligence Security Services.

The Minister of Justice and Interior, Miguel Rodriguez Torres, announced on TV that Ceballos had been detained on charges of ‘civil rebellion’ and ‘conspiracy’.

‘The arrest of Daniel Ceballos is an act of justice! This Mayor facilitated and supported the irrational violence that erupted in San Cristóbal. A mayor has an obligation to enforce the constitution and laws, not to promote violence, anarchy and civil rebellion!’
Tweet by Torres twitter.com/RodriguezT_MIJP

We are concerned that such statements undermine the presumption of innocence, the cornerstone of justice and due process.

‘The authorities have a responsibility to maintain public order. However, unless they respect the human rights of all and exercise restraint, their actions will lead to even more violence. It is also crucial that opposition leaders send a clear message to their supporters not to commit human rights abuses.’
Guadalupe Marengo, our Americas Deputy Director

What are you doing?

We are calling on President Maduro to uphold the rule of law and ensure that any ‘extraordinary measures’ he adopts respect the human rights of all in Venezuela, without discrimination.

The authorities in Venezuela must urgently investigate the deaths of all those killed during anti-government protests.

Anyone responsible for violence - demonstrators, security forces and armed civilians alike – must face justice. Protesters still held in detention must be charged or immediately released.

According to reports, journalists have been prevented from covering the protests. At least one TV channel is believed to have been blocked. Marengo said: ‘It is essential that journalists are allowed to report events freely and human right defenders are able to monitor demonstrations.’