Despite initial optimism when Iranian President Hussain Rouhani was inaugurated this August, the situation facing workers in Iran has not improved. Trade union rights are still being routinely violated, as are the rights to freedom of...

The Fiji Sugar Workers' and General Union (FSWGU) has just held a secret ballot for strike action in the sugar mills, calling for a pay increase and other improvements in terms and conditions to deal with seven years when real pay...

Opponents of dictatorships often assume they're being monitored by the authorities. But few dictators boast about it, as Swaziland Prime Minister Sibusiso Dlamini has done. He told Parliament recently that the regime was keeping files...

When the military regime says it isn't, it appears. The pretence that Fiji is returning to democracy gets thinner by the month, and a return to full membership of the Commonwealth or Pacific Islands Forum looks further away than ever...

Say a prayer for freedom in Swaziland

Freedom of speech, freedom of assembly and freedom of religion were all dealt yet another blow in Swaziland on Saturday. In the last feudal dictatorship in Africa, it is not even possible to pray for the future of the country any more...

UPDATE: this evening we've heard that Behnam has been released on bail. Jailed Iranian trade unionist Behnam Ebrahimzadeh is requesting an emergency release as his 13-year old son, Nima, his only child, who has very recently been...

Somali journalists are calling on the UN to restore workers' rights at the UN-funded Radio Bar Kulan (RBK) which broadcasts from Kenya into its troubled and dangerous neighbour. Journalists' unions from 25 African countries and beyond...

A month ago, the Fijian military dictatorship expelled a mission from the International Labour Organisation (ILO) which included a member of the International Court of Justice because the regime rejected the mission's terms of...

Commonwealth needs to get tougher on human rights

Commonwealth Foreign Ministers meet this weekend in New York to approve the draft Charter of the Commonwealth which sets out the values that member states are due to uphold, and Commonwealth trade unionists are demanding that they get...

The TUC has joined trade unionists globally in protesting to the Government of Cote d'Ivoire about the continued imprisonment of Basile Mahan Gahé, General Secretary of the Ivorian trade union confederation (DIGNITY), which like the...

Human rights at work: annual report shows we really must do better

A new report out this week records a year's worth of violations of fundamental human rights for working people. Breaches of the ILO's eight core conventions (banning forced and child labour as well as discrimination at work, and...

Trade unions expressed outrage at the actions of the employers’ group at the International Labour Organisation Conference for blocking any debate and discussion on some of the worst cases of worker rights violations at the meeting in...

A schoolteacher in Swaziland waiting for a bus was arrested last week just for carrying a bag with the logo of the newly united union confederation TUCOSWA, the Trades Union Congress of Swaziland. Wandile Ndlela was approached by...

Iran: workers' voices will not be silenced

The Iranian regime has jailed another trade unionist in its continuing, and unsuccessful, attempt to get workers to shut up about the repression and exploitation they suffer. Reza Shahabi, Treasurer of the bus workers' union in Tehran...

Iranian academic and teacher trade unionist Prof Abdolreza Ghanbari is facing the death penalty in Iran. Like many, his crime if "enmity towards God", a catch-all offence used primarily to trigger reference to revolutionary courts not...

The TUC has joined with sister organisations in Australia, New Zealand and the USA to press our respective governments to take action over restrictions on union rights imposed by the military dictatorship that runs Fiji. These include...

Kamal Abbas, the General Coordinator of the Egyptian Center for Trade Union and Worker Services (CTUWS) has just been sentenced to six months imprisonment for comments he made at the International Labour Organisation (ILO) last year...

Colombian trade unionist, human rights defender and academic Liliany Obando was released from the Buen Pastor women's prison at 8:30pm on Thursday night, and was greeted by a delegation from the UK trade union solidarity organisation...

Human Rights and the Olympics

Should we be keeping human rights out of sports? No, of course not. The International Olympic Committee (IOC) Olympic charter proclaims the values of fairness in sport and that should apply to the working conditions of people who make...

The TUC continues to be deeply concerned about the attacks on workers' rights in Turkey. Free trade unions are being subject to a continuing campaign of intimidation and repression spearheaded by both private sector employers and the... 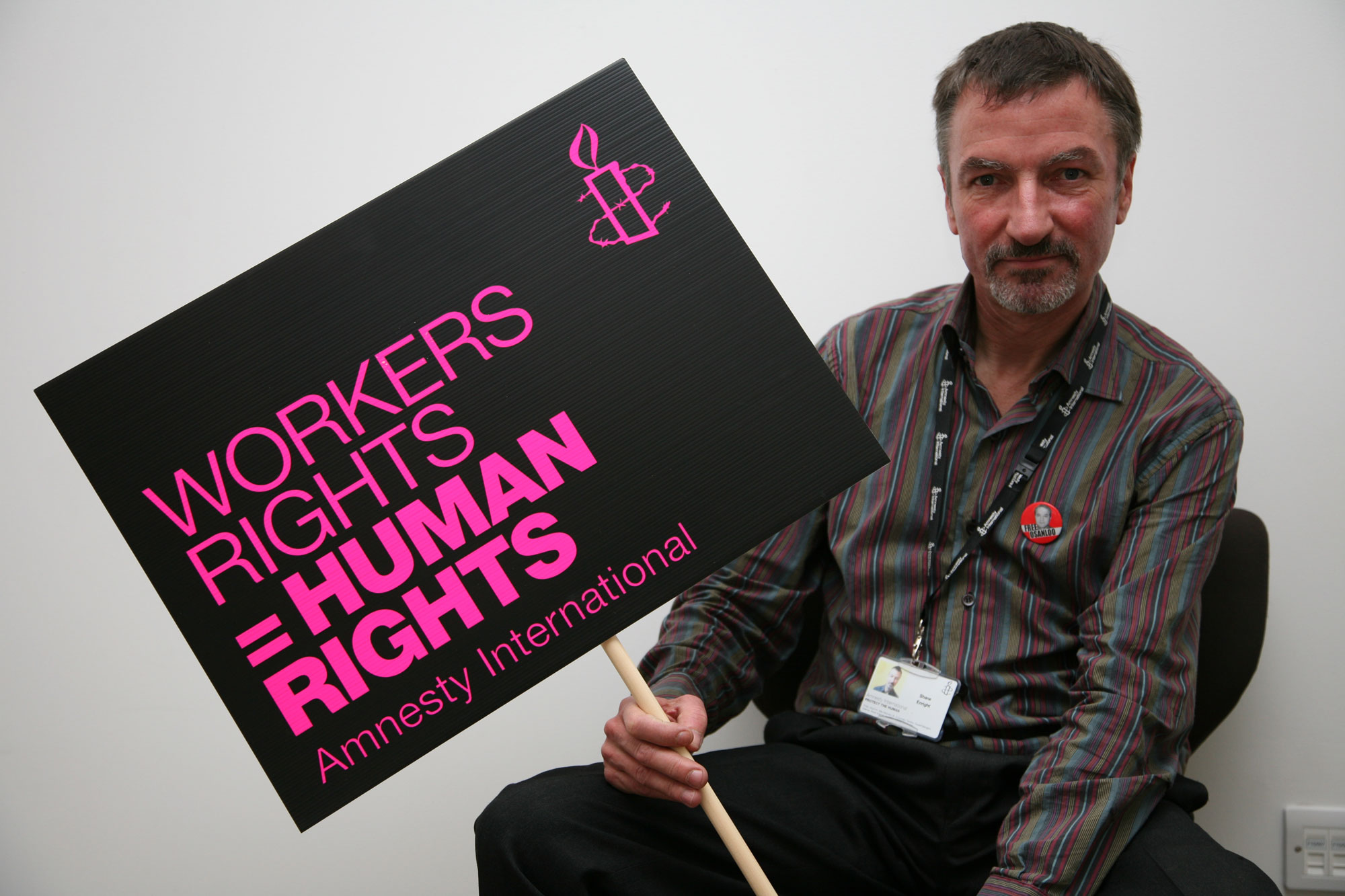 The right to join a trade union and bargain collectively, including taking strike action, are fundamental human rights, recognised as such by Amnesty International, the UN and the International Labour Organisation. Key human rights for trade unionists include not only freedom of association, but freedom of assembly, freedom of speech, equality, freedom from forced labour/slavery and dignity at work. The TUC is a formal partner with Amnesty International UK, and this blog reports on many trade union campaigns around the world for human and trade union rights. It is predominantly written by staff at the TUC European Union and International Relations Department as well as members of the AI UK Trade Union Network and AI UK trade union liaison officer Shane Enright (that's him in the profile image with a placard - he's also often seen with a megaphone!)