Indonesia: Ahok conviction for blasphemy is an injustice 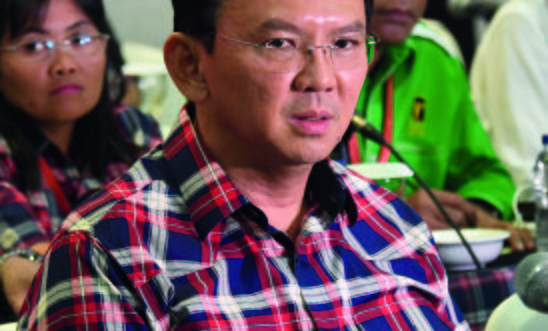 On 9 May, Basuki Tjahaja Purnama, better known as Ahok, was convicted of blasphemy. He was immediately sentenced to two years in prison. This is despite evidence that his words had been twisted for political purposes.

Ahok, who is a Christian, was accused of ‘insulting Islam’ in a video he posted to announce that he would run again for election as governor of Jakarta this year.

He is the fourth person in Indonesia to be convicted under blasphemy laws in 2017. Amnesty International believes these laws have been repeatedly used in attempts to stifle freedom of expression and religion. Between 2005 and 2014 Amnesty International has recorded at least 106 individuals who have been prosecuted and convicted under Indonesia’s blasphemy laws.

Please add your voice to our urgent petition and demand that the Indonesian Authorities immediately and unconditionally release Ahok.

Texts charged at standard network rate, no more than 10p. Please ask bill-payer’s permission. You must be 14 years or older. By giving us your number you agree to future communication from us by SMS. To unsubscribe, text STOP to 70505 at any time. We will also call you about getting more involved in our work. Text NOCALL to 70505 if you prefer not to be called.

Find out more about taking action by text here.

This is political Movement, jailing good Governor because he fight all the corruptions.
He is one of Promising Candidate for Vice president then President. Opposition Party Fear to death to Him. So, Using Religion as a Weapon to Attack him.
(Human Rights Violated HERE )

how can we support this ??

Well, I need to reveal this

First, Ahok is one the best Governor Jakarta or Indonesia ever had. He won so many award as Jakarta Governor

Second, he is hard worker, anti-corruption, honest and he really hate / don't hesitate to punish people that violate the law for own gain (whatever your race, religion and status).

Third, because of that, there is some politician that didn't like him. Before blasphemy issue, bad politician already accuse him of so many issue but failed.

Fourth, Ahok became a victim of racism and belief discrimination way before blasphemy issue at 2014 riot by FPI (Muslim Hardliner organization lead by Rizieq Shihab) that didn't like him too. They (FPI) call him infidel, syaiton (satan), and they say Non-Muslim should not became leader in Jakarta or Indonesia.

Sixth, he has Muslim family (foster family), donate for Mosque construction, zakat, and building / renovation some Mosque while he became Jakarta Governor

Seventh, He only say "some people that use Al Maidah 51 to fool the others", which he means, some bad politician that use Quran (for their own political gain) as a tool for fooling people.

Eighth, People that report him mostly from politician that hate Ahok and member of FPI/GNPF MUI ! And there is no warning beforehand for what he (Ahok) say, they just file a report to police and riot him. (more than I can count). Even though Ahok already apologize for what he said, they still riot him ! And did I mention that they file a report close to election day?

Ninth, even prosecutor, witness and judge can't prove what Ahok do is intentionally to hate on Islam (refer to point Fourth to Seventh).


So based on what I mention above, it's insane that Ahok sentenced 2 years prison for blasphemy while some bad politician and FPI that do even worse, can walkout free just like that.

That what I call INJUSTICE !!

If we leaved Ahok in jail we had permitted terrors and intimidations in the name of religion. Islamophobia issue will decrease Moslem population in the world as significantly and intolerance acts will grow massively. If you are a part of peace generation please free Ahok and support this action!!!!

How Can we support this?
I tried to sent Text ‘RELEASE5’ with FIRST & LAST name to 70505. but always failed sending text to 70505. I use operator XL and Telkomsel from Indonesia,Any idea?

Hello, I live in New Zealand. Is there a way I can support this? The text message I send from here may not get through to you.

I fully support this cause!

Indonesia...... One scabbed sheep is enough to spoil a flock

Hi karuniakomputer and angelasoh93, really sorry but you can only take action through our SMS network if you are a UK citizen. We have however issues an Urgent Action on the case, which outlines how you can write a letter to the authorities. http://bit.ly/2uN38XM