There’s more to sex than someone being male or female 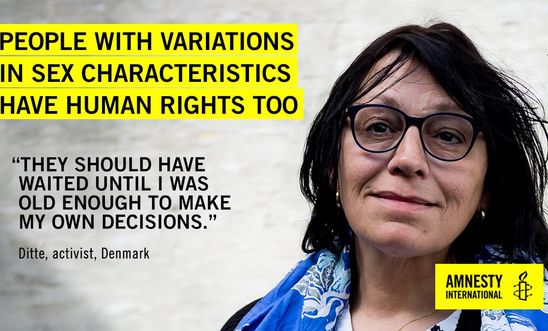 By Lui Asquith – Vice Chair of the LGBTI Network

“Is it a boy or girl?!” We have probably all asked this question at some point in our lives, for it is almost always the first thing someone asks a new parent. However, we ask you this month how often you acknowledge that a new-born may actually be intersex… And if you do not consider it – start to, from today.

Statistically, it is far more likely that a baby will have only male or female sexual characteristics. However, as figures currently stand, approximately 1.7% of children are born intersex. It is time we start celebrating and accepting the spectrum of sexual characteristics that exist and the identities around them.

Crucially, we need to stop violating the rights of those that don’t fit the current sex binary.

So, what does ‘intersex’ even mean?

You are not alone if you are asking this question.

Being intersex is about biological sexual features and not about gender identity. When researching for this blog, typing ‘intersex’ in to the search engine produced a majority of results referring to being ‘transgender’.

Let us make it clear (given the lack of correct information currently out there): being intersex has nothing to do with being transgender. Someone who is intersex may also be transgender, but not necessarily will be. This is because sex and gender are separate things and you should always keep them separate in mind.

Intersex is a term, a sex identity, used by many, (but not all) of those who have sexual characteristics that fall outside the typical binary of being male or female. What we mean by ‘binary’ is that you, ‘are either this… or that.’ So, when we discuss the binary of sexual characteristics it means that someone is assumed to, ‘either have a vagina (‘are female’) or a penis (‘are male’)’.

This approach is wrong. The reality is that binaries are always restrictive and do not acknowledge the variety of identities that exist in society. Not everyone falls within the biological binary, with millions of intersex people having been born with sexual characteristics that do not clearly resemble male or female characteristics.

In case you were wondering, the sexual characteristics between intersex people can vary dramatically, (just as penises do or vaginas do); and no, it is not okay to ask what they ‘look like’.

Why don’t we talk about intersex people more today?

The way we currently deal with intersex people works off a negative stigma based on a belief that anyone outside the sex binary was someone malformed and we should use the skill set medicine has acquired over time to ‘normalise’ them and satisfy society’s drive to categorise every individual in to being male or female.

Surgery is often carried out in a non-emergency situation, in an invasive fashion, on children who are too young to consent, so instead obtained from parents who have not been given enough information. What’s more, once the surgery has been carried out it is often irreversible.

The current approach to intersex people ignores the simplicity that the binary of biological sexual characteristics does not exist. It also violates the basic human rights of the individual, including: the right to a private life, human integrity and the right to not be discriminated against based on one’s sex.

The state has an international duty to uphold the rights of intersex individuals and we believe the only way this can happen is for surgery only to be permitted once the individuals themselves are old enough to consent and make their own decisions.

Too many people have lived in shame, have been subject to abuse, ridicule, prejudice, discrimination, and cornered in to a fatal state of mind.

We stand in solidarity with the intersex community specifically on Intersex Awareness Day (26 October) and on Intersex Day of Remembrance (8 November) – and going forward. This is a written dedication to continue working for your rights and an acknowledgement that your identity needs to be discussed more in today’s society to breed acceptance. We as a society need to start understanding intersex conditions as human rights issues, and to celebrate variety, rather than try to eradicate it.

We are starting to see the spectrum of sexual orientations and gender identities being understood -- although there is still a long way to go. Now we must ensure the same progress is made with intersex people.

It is as simple as this: your genitals are primarily for your own use, not for the comfort of others.

Finally, we ask you to think before you next ask: “is it a boy or girl?!”