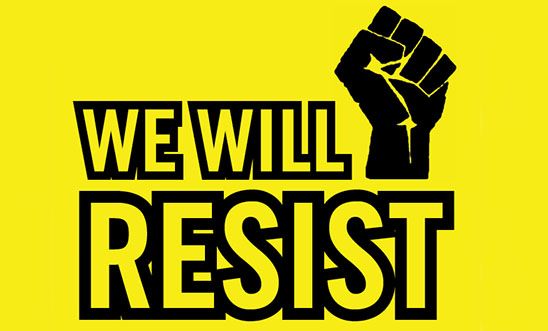 Overnight, two courts intervened to temporarily block Trump’s new Muslim ban, which was set to go into effect at midnight.

This is a vindication for human rights and public outrage. It’s also an enormous relief to people across the country: For a family worried for the grandmother now “banned” from reuniting with them, for newly married spouses torn apart.

These court orders also stand in for hope: That the brazen bigotry of Donald Trump’s presidential campaign will fail. They symbolise our defense against what we hope is unimaginable here: A special registry of all the Muslims, an indiscriminate round-up.

And, we hope they are a reality check against our worst fear: Forcing people into camps based on who they are, in a bleak repeat of Japanese imprisonment after World War II.

I am relieved, but also deeply worried: Too much is starting to seem “normal” in this deluge of the bizarre and bigoted.

This morning, President Trump sent budget requests to Congress that seek more than $6 billion to build a wall at the southern border and lock up people who are fleeing violence and persecution.

The cuts to UN funding and humanitarian aid are like gushing, arterial bleeds — to anyone who understands how this government works, or who cares to see it keep working.

It is no exaggeration to say that thousands of lives hang in the balance: From peacekeeping missions to programs aimed at saving the lives of mothers giving birth, these budget cuts slash blindly and ferociously.

Last night, after the Hawaii court dealt a legal blow to his second Muslim ban, President Trump immediately doubled down, pledging to take it all the way to the Supreme Court, if necessary. “We’re going to win,” he said. Right now, though he has the presidency and his party holds the majority in Congress, one of his irrational and inhumane policies is losing.

The trouble is, he has many more of these policies. His pattern so far is to float first versions that are so outrageous, that his second versions look passable. Indeed, our count of senators shows that while 58 criticised the first Muslim ban, only 43 spoke out against the second.

His budget request may meet the same fate: It won’t survive intact, and it will meet real opposition in Congress, but some of it will survive. If many in Congress are placated, it’s up to us to sustain the outrage.

The court orders give us hope; we must make sure they replace this hard reality: President Trump’s agenda of bigotry has been temporarily defeated, but he is here to make it stay.

Take action: tell the White House to stop the ban for good