Three years and counting for exercising his right to freedom of speech: Free Leopoldo Lopez 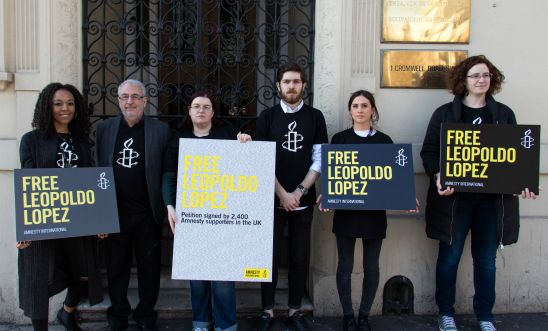 On an exceptionally warm and sunny February day, we gathered outside the Venezuelan Embassy to deliver a petition with 2400 signatures collected from Amnesty supporters all over the country.  The petition called for the immediate and unconditional release of Leopoldo Lopez, a prisoner of conscience about to complete his third year in detention for his non-violent political activities.

Despite being a working day, the Embassy was closed, with a padlocked metal grille barring the access to the front door.  Were they trying to avoid meeting us?  Undeterred, we rang the bell and waited.  No response.  We waited on the busy street.  The Embassy entrance is on Exhibition Road and, as it was half-term, the wide pavement was full of parents and children heading for the museums, many of whom paused to see what we were doing.

A passing Colombian television team interviewed and filmed us.  We told them of the plight of Leopoldo, the leader of Voluntad Popular, a Venezuelan opposition party, who in 2014, with food shortages, inflation and insecurity engulfing the country had called on Venezuelans to stand up for peaceful, democratic and constitutional change.

During February and March 2014 the country was shaken by mass demonstrations for and against the current government in various parts of the country. Violent clashes between the security forces and protesters resulted in 43 people killed and hundreds seriously injured, including law enforcement officials and by-standers. President Maduro called for Leopoldo’s imprisonment, accusing him of inciting the violence.

On hearing that an arrest order had been issued against him and after spending five days in hiding, Leopoldo decided to give himself up. He was detained and, after 15 months in detention, he was sentenced to 13 years, 9 months, 7 days and 12 hours in prison.  Unless he is released, he will be in jail until 2029 when his children, now 7 and 3, will be 19 and 15 years old.

But Leopoldo’s trial was patently unfair. His “crimes” included causing damage to the Attorney-General’s office, sending subliminal messages, arson (even though there was no evidence of any fire) and belonging to a criminal gang.  There was no reliable evidence to substantiate these charges.  The court refused to accept 59 (out of 60) witnesses and 30 exhibits produced by the defence.

One of the prosecutors fled the country soon after the trial, saying that he had been ordered by superiors to sign a fraudulent charging document against Leopoldo: “they wanted him arrested and condemned to get him out of the political game”. He added: “In Venezuela, fear rules; that’s the way the law is”.

Well before the order for his arrest, the government had made clear its determination to imprison Leopoldo. On more than ten occasions during 2013, President Maduro and members of his administration had said, on national television, that Leopoldo had to go to jail for his opposition to the government.

Back in Exhibition Road, we were still waiting for any sign of life in the Venezuelan Embassy. Finally, after an hour with no response, we posted the packet with the petition signatures through the railings of the security grille.  For good measure, we also left a couple of our placards, in full view of passers-by: FREE LEOPOLDO LOPEZ.