The hair on my head is mine, not the State’s: Challenging forced veiling in Iran 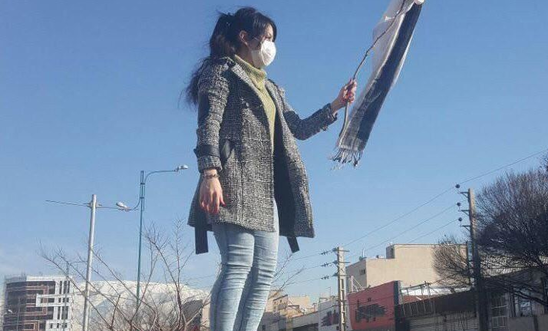 Protesting in Tehran against the legal practice of compulsory hijab (veiling)

In Iran, forced veiling (hijab) is sadly a legalised practice which continues to violate the rights of women and girls across the country. According to Iranian law, women and girls as young as nine years old who are seen in public without a headscarf can face a prison sentence of between ten days to two months or a cash fine. However, in practice, girls as young as seven years old have been forced to wear hijab.

Thousands of miles away from the streets of Tehran it can be difficult to understand what it’s like for women who are denied the crucial right to choose to cover or uncover their hair and bodies as they wish. However, I recently began to reflect upon the issues at hand as I myself decided to remove my headscarf (hijab) and to no longer cover all of my body with long loose clothing (having previously covered everything except for my face, feet and hands).

As a Muslim woman, this was an emotional, difficult decision yet it was MY decision and mine alone. Just as I’d happily and freely taken the step seven years before to start wearing hijab, I’d now decided that this was no longer in-line with my theological beliefs and so I chose to uncover. Of course, this process was about my choices and my relationship with God and no one else – not my family, not my friends and certainly not the State.

Freedom of religious expression, religious interpretation and the right to follow your faith in the way you see fit are personal fundamental freedoms which ensured I was able to make this decision. I, of course, continue to be a proud Muslim and am happy with my decision, whilst naturally still fully respecting my sisters who choose to wear hijab, as well as those who don’t – as I always have.

However, whilst I passed through this “transitional period” fairly easily, the same cannot be said for women in Iran where my actions would be illegal and cause me to be branded a criminal, arrested, shamed by the State and potentially imprisoned for taking off my scarf. There, the choice that I had made for myself was simply not allowed. I would be denied my right to personal expression, denied my right to bodily autonomy and denied my right to religious expression on MY terms.

In Iran, the increasing crackdown on women’s rights defenders has in fact meant growing numbers of arrests for women who have dared to remove their scarves in public and oppose the humiliating practice of compulsory veiling. Last year alone, over 112 women were arrested for defending their rights, including prominent human rights lawyer Nasrin Sotoudeh.

A long-standing campaigner for women’s rights, Nasrin has now been sentenced to a total of 38 years in prison and 148 lashes for her human rights campaigning, including speaking against the practice of forced veiling. In addition, women’s rights defender Yasmin Aryani was also recently arrested after she appeared on a video without a headscarf discussing the issue of women’s rights on public transport. Merely four days later, it was then revealed that women’s rights defender Vida Movahedi (known as the first “Girl of Revolution Street”) had also been sentenced to one year in prison in March for peacefully protesting against forced veiling.

With these women paying such an incredibly high price for demanding the freedom to exercise their fundamental human rights, we must stand in solidarity and take action. As a global movement working to protect human rights defenders worldwide, we can and must work to ensure that Nasrin and her fellow activists across Iran are free and safe.

Following Nasrin’s shock sentencing, almost one million people took action within a single week. What’s more, the international media outrage has taken the authorities by surprise. In Iran, the judge who sentenced Nasrin dared to deny the harsh sentence on television, meaning that Nasrin is now able to sue for libel, whilst over the past month, the authorities have in fact released several political prisoners.

So, as the campaign for Nasrin’s release continues and we now approach Nasrin’s birthday on 30th May, we need to step up our efforts!

For Nasrin’s birthday, Amnesty is now launching a global week of action. Here’s how you can take part:

Nasrin and countless other women in Iran need our support. Take action today!

For more information on how to get involved, email Elizabeth.Arif-Fear@amnesty.org.uk and Oscar.Jenz@amnesty.org.uk (AIUK Country Coordinators, Iran).