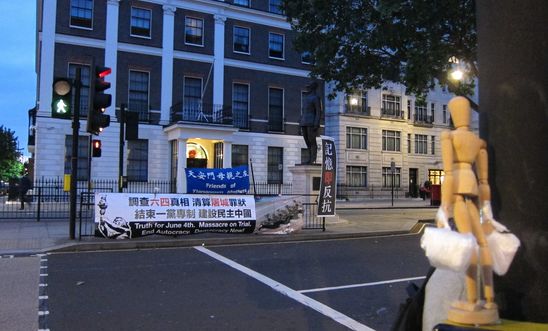 On Tuesday the 4rd of June, 8pm-10pm, aorund 250 people including many young people gathered in front of the Chinese Embassy in London to commemorate the 30th anniversary of the 1989 Beijing June 4 Massacre, showing solidarity with Tiananmen Mothers.

Artists in London recounted ten stories of peaceful protesters and unarmed civilians who were killed at streets, inside Tiananmen and at home.

With every year that passes, achieving justice becomes even more difficult for family members of the thousands who were killed, injured or imprisoned in Beijing and across China – but it is essential for us always to stand together and keep fighting for justice, for them and for us all.

Remembrance is resistance. ‘Tank Man’ who showed us the hope and dignity of humanity, whose spirit keeps inspiring us in our struggles ahead.