Votes for children: the case for Universal Suffrage 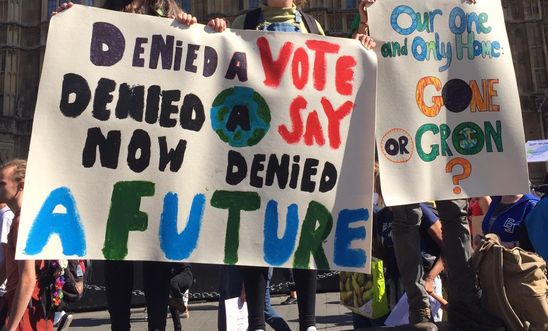 Article 21 of the Universal Declaration of Human Rights demands that “everyone” has the right to partake in their government, either by voting on things directly, or through choosing representatives. It’s this article that you would use to challenge systems that didn’t allow you the vote if you were a woman, or if you were poor, or if you were of a particular ethnic background. There’s no further qualification for attaining this right – it’s a basic human right that applies to everyone, and that everyone should have access to.

There are some rights with further qualifications. For example, Article 16 (UDHR) makes extremely clear that the right to marry only applies to men and women “of full age”.

No such limits apply to the right to vote – and yet this basic, fundamental right to express an opinion on decisions that will effect or govern every aspect of their lives is routinely – almost universally in fact – denied to children.  It is difficult to see this as anything other than a gross violation of their Human Rights.

The Convention on the Rights of the Child has something to say here too, although it is weaker than the clear demand for universal suffrage within the UDHR.  All Children are guaranteed the right to express what views they can hold freely, in all matters effecting the child. Let’s be clear from the outset – who governs the Country certainly does effect the child. From policy on climate change and foreign affairs, through austerity and surveillance, to education and child support, children have more of a stake in large parts of governmental decision making than adults, and at least as much of one in the rest. When it comes to child justice in the UK, children can be deemed criminally responsible when they turn 8 years old. But this 8 year old, has no political means to shape the laws by which they are governed. Even pensions will be relevant to current children eventually – while pensioners will never again be in a situation where primary education provision, for example, directly effects them.

So why are children denied what should be a fundamental right to partake in government, when it clearly effects them and their lives? Excellent question. And one I can’t work out the answer to.

The quick and easy response is ‘competence’. The language of the CRC is suggestive here; “States Parties shall assure to the child who is capable of forming his or her own views the right to express those views freely in all matters affecting the child, the views of the child being given due weight in accordance with the age and maturity of the child.” (Emphasis added).

So the CRC, without a sense of irony apparently, thinks we should only take into account Children’s views so far as they conform to adult views of maturity. But even in this rather luke-warm assessment of the capability of children, it does recognise that there is some capability. It recognises children have an opinion and they have the right for that to be taken seriously (or sometimes, at least). What it introduces, however, is effectively a test of competence. Your opinion is only valid if the rest of us think you’ve really understood the situation, made reasonable connections from premise to conclusion, have adequate information, etc. Which might seem reasonable. Except we don’t do it to anyone else.

The second you turn 18, there is no qualification of competence on your right to vote. You can be as ignorant, disengaged, illogical and plain stupid as you wish, and nobody claims that should impact your right to vote. Because that’s the whole point, isn’t it?

If the right to vote is about knowledge, or skills, or intelligence – it shouldn’t be evenly applied, because these things are not evenly applied. Why do I have as much say on the economic future of this country as an economics professor? Why does the economics professor have as much say on the health service as a nurse? The right to vote is the right to have an opinion, and the vote itself is the test of those opinions. It is trivially true that democracy is based on an assumption that the power of an opinion should be based on the proportion of people that hold it – that is how government gains legitimacy from being elected. But with children, we invalidate their opinions before they’re tested. We ban them from the conversation, from candidacy, and from the vote. We deny them engagement, and in doing so we deny them their rights and deny the government the legitimacy that comes from representing ‘all peoples’.

That’s outrageous. Adults should feel free not to vote with children if they don’t agree with them, or don’t think their opinions are mature, and let the democratic chips of judgement fall where they fall. To ban them instead is necessarily a refusal to engage.

Because we know it’s not about competence. If it were, the qualifying factor would be a test of competence, evenly applied, not a test of age. The two are clearly not the same and shouldn’t be confused. Whatever competence is, and whether we should have a competence qualification, are separate conversations. But whatever competence is, it is absurd to imagine it will fall neatly across the completely arbitrary line of all of our 18th birthdays.

If it’s not enough that this is patently immoral, the European Courts, at least, have also suggested blanket bans may be problematic to human rights. In Kiss vs Hungary (ECtHR), the court made very clear that they viewed the exclusion of those not capable of understanding the consequences of their actions as a legitimate aim – but a blanket exclusion of people that disregards an individuals actual faculty is disproportionate to that aim.