Children should be empowered and protected, not silenced and side lined 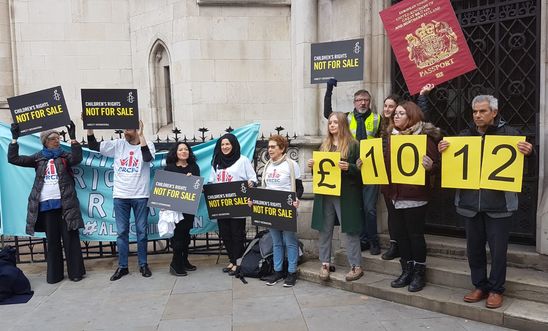 Holly Shorey, 20, is Vice Chair of Amnesty International UK’s Children’s Human Rights Network (CHRN) Committee. Holly is determined to make children’s rights a reality, and to prove that young people really are the leaders of today.

Children have often been told that they are the future, that they will solve the world’s problems, innovate solutions and be “the leaders of tomorrow”. But why does it have to be tomorrow? Why don’t we recognize that children are brave, powerful and independent just like adult human rights defenders?

Children shouldn’t have to wait to grow up to be listened to, which is why I’m committed to promoting and empowering child human rights defenders.

Recently we have seen thousands of children across the world striking to make their voices heard on the climate crisis. While our work has been met with praise by some, adults in power and sections of the media have been known to criticise these inspirational children for standing up for their rights. Sometimes these are the same people who dismiss children and young people as apathetic and inexperienced. Children are being silenced and side lined and made to feel as though their opinions don’t matter on the issues that will affect them the most.

I believe we must all stand in solidarity with child human rights defenders and their achievements and combat this damaging public rhetoric against children.

Everyone has the right to be heard.

I got involved with child rights activism through the Amnesty UK Children's Human Rights Network. When I was 15, I became part of an Amnesty UK youth group. I'd always been a child who stood up for what I believed in, always outraged if something was unfair or unjust. For example, in the UK, sonic devices known are mosquito devices are used to prevent children from gathering outside shops, train stations and parks. I experienced how painful these were to the ear, and how unfair it was that children, who were doing no wrong, were forced out of associating together. I knew it was wrong, but I didn’t have an outlet for my voice.

Through our work with the Amnesty UK Children's Human Rights Network we have led a national campaign on children's right to citizenship. There are over 120,000 children in the UK who are prevented from accessing their right to citizenship due to the Home Office charging horrific fees. For every £1,012 application, the Home Office makes £640 profit. It is not acceptable to price children out of their rights. Our campaign to lower the fees started off small, but it’s grown across the Amnesty UK movement through youth groups and trade unions. We’ve amassed over 23,000 signatures on our online petition, our campaign video has spread across social media, and we have protested outside the High Court in solidarity with the judicial review into the legality of the fees.

Children are at the heart of this campaign and it’s encouraging to see them take action. My role has been to ensure this is a youth-led campaign.

Recently, all our energy has been put into our Make Rights Real campaign, focusing on the UN Convention on the Rights of the Child (UNCRC). The UNCRC is the most widely ratified human rights treaty in the entire world, but most states, including the UK, have not signed up to its complaints/communications procedure. This means while rights violations can be reported at a domestic level, if they’re not resolved, they cannot be escalated to the international level. Without the ability to complain when our rights are violated by the state, we can’t hold governments to account.

With the 30th anniversary of the UNCRC nearing, it is more important than ever to make sure the rights set out in it are a reality in all children’s lives.

The youth take over

In January, we held a child takeover of the Amnesty UK office in London. The children ran Amnesty's advocacy, campaigns, media, and even the director's office for the day. They really showed the adults how it's done. We are currently working on a national advocacy competition, “Use your voice to demand your rights”. This will involve children across the UK debating child rights violations in the UK. These include period poverty, climate justice, and cuts to mental health funding.

On Friday 14 June, I will be representing Amnesty International at the UN at the technical meeting on protecting and empowering children as human rights defenders.

I am looking forward to speaking about how the recommendations from the UN Day of General Discussion 2018 can be implemented, and how we can move towards children being taken seriously when they stand up for their rights.

Children are often cut out of the dialogue when it comes to human rights and I hope that we, as Amnesty International, can be champions of a truly meaningful participatory culture.  Let’s make sure children are empowered and protected - not silenced and side lined.