Trump UK visit: Stand up to the misogynist in chief 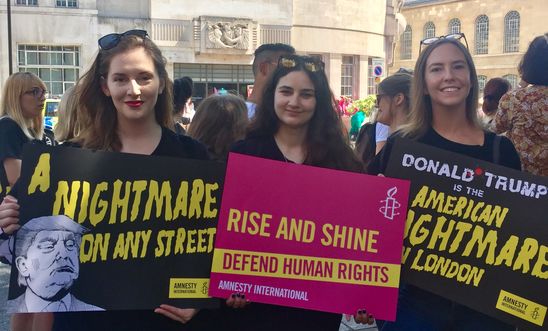 Eighteen months after taking office, the misogyny of the Trump administration has moved from theory to practice, impacting the lives of millions of women and girls.

We are not just talking about women in the United States, but around the world.

The most invidious move is the reinstatement and extension of the Mexico City Policy, also known as the “Global Gag Rule”. This blocks US funding for any NGO that provides abortion counselling or referrals, or that advocates to decriminalise abortion or expand abortion services. Enacted by Republican administrations and repealed by Democratic ones since 1973, with Trump it’s has been extended to all international healthcare aid doled out by the US government - from $600 million in family planning money, the Trump policy now applies nearly $9 billion which means that more organisations, and the women they serve, will be impacted.

The impact of the extended Global Gag Rule will be catastrophic for the lives of some of the world’s most vulnerable women. According to WHO data, between 1994 and 2008 in the most-affected countries, women were far more likely to have unintended pregnancies and two-and-a-half times more likely to have an abortion - most of which were unsafe - than when this blatantly anti-women policy was not in effect.

Meanwhile, the situation for women in the US is also increasingly worrying. Restrictions on abortion have been steadily enacted at state level. According to the Guttmacher Institute, 401 state-level abortion restrictions were introduced between 2011-2017. Now the federal government has plans to introduce a domestic version of the gag rule, which is set to affecting some four million people eligible to access federal funding for affordable birth control and reproductive health care.

The domestic gag rule would make it impossible to patients to get contraception or preventive care from providers such as Planned Parenthood, which serves 41 percent of people entitled to this specific funding, 21 percent of whom are African Americans and 32 percent Latinos who already face significant barriers in accessing healthcare.

It would also prevent health care providers across the country - including doctors, nurses, hospitals, and community health centres - from referring their patients for safe, legal abortion.

On top of all this, President Trump has appointed the conservative judge Brett Kavanaugh to the Supreme Court following the retirement of Anthony Kennedy last month.This appointment provides Trump the opportunity to push ahead with his campaign trail rhetoric on overturning Roe v. Wade, the landmark US legal decision which legalised abortion in 1973. This would obviously impact the lives of all American women and would represent a global set-back for women’s rights.

Trump’s rhetoric is not unique and many of these regressive, anti-women policies have been supported by Republicans for decades.

Seen through a wider lens, what we’re facing - from the USA to Poland to Brazil and many other places - is a global backlash against women’s rights and feminism in the context of rising nationalism and xenophobia. This backlash is partly a response to the gains made by women’s movements for the past 40 years.

The most marginalised women are currently bearing the brunt, as we’re seeing at the US border, where the Attorney General Jeff Sessions has tightened the rules for asylum by declaring domestic violence and gang violence private matters, making it much more difficult for a victim to qualify for asylum.

This reverses decades of work from feminist lawyers and human rights defenders to make violence against women a public policy issue. More than one in three (35 percent) women worldwide have experienced either physical and/or sexual intimate partner violence or non-partner sexual violence in their lifetime. Women are risking their lives to flee abuse because they cannot find protection at home, with central American countries (source of much US inward migration) having some of the world’s highest rates of violence against women.

While bad news can feel overwhelming we must remember that women’s human rights have been fought for, never handed down. As we rightly celebrate the gains made by the women’s movement 100 years ago we also must continue making our voices heard.

So, we need to get out on the streets during this presidential visit. And to make some noise.