My family’s right to a home

Written by Liesbeth, a Dutch citizen living in the UK for almost 20 years, as well as an activist, gardener, blogger and full-time mum.

We recently went to apply for our permanent residency document. With a kilo of paperwork handed in, I am slightly relieved that this is at least done. We now have to wait 4 to 6 months for this document recognising that we have lived here for five years in accordance with EU law and as such have permanent residence. Then it’s hoping that the terms of permanent residency don’t get changed after the UK leaves the EU.

It’s a lot of hoping and I am upset that we felt compelled to go through this process to guarantee our future here. At the same time, I fully understand friends who are not applying, as indeed, it’s not yet a requirement and who knows what procedures and processes the UK government are going to establish and agree with the EU. Being a so-called “bargaining chip” is an uncomfortable and anxious experience. 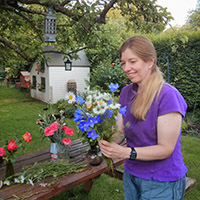 I have got EU friends who have already left or who are thinking about leaving. I don’t blame them. I feel just as unwelcome as they do, but I am not prepared to give up the place which has been my home for nearly twenty years. Our children, both British and Dutch citizens, were born here. The oldest is about to go to university and the youngest has just started reception. We have a house, work, friends and colleagues, in short – everything that comes with being at home.

As opposed to our children, my husband and myself do not have dual citizenship. Under Dutch law, upon becoming British we would lose our Dutch nationality as neither of us were born here or are married to a British person. We never thought that this could be an issue, but the fact that Theresa May has refused to guarantee our right to stay once the UK leaves the EU, means that it may well be. This has shaken me pretty badly.

Sign the petition: ask the government to guarantee EU citizens' right to remain in the UK

We seem now to belong to a group of people scapegoated as stealing jobs and causing the NHS crisis — at least that is how some of the media describes us. Before campaigning began for the referendum, I was more or less a happy British resident and a Dutch citizen, neither being more important than the other. But since then, the political atmosphere has changed. The stone thrown through the window of my friend’s home the day after the referendum didn’t help either.

An unfair and discriminatory system

The system is full of injustices and in many ways I am one of the lucky ones. You can only apply for permanent residency if you have been here for more than five years. Where does this leave those who have been here for less time? Surely, every EU citizen living here, for however long should be guaranteed the rights they had when they came into the country.

Something I find quite worrying is the fact that 28% of people applying for a permanent residence document are turned down. Some fail because they didn’t get private health insurance that nobody knew anything about. Insurance that they were never asked for when going to the GP or the hospital.

Others face difficulty proving there are no gaps in their continued residence here. It also looks like a large proportion of failed applicants are mothers who didn’t work because they were bringing up children, often while their British partner or husband was the breadwinner. As such the process is not just unfair, it discriminates against women.

As in a lot of situations, the rules around permanent residency also favour those who have money. It’s £65 per person to apply, plus other costs — and of course you have more chance of success if you’re able to afford a lawyer to help you with the process.

Some people simply do not have this kind of money so are unable to apply, and I fear the fee will increase in the future. Even once you apply, if you would like to take the next step and become a British citizen, then that’s at least another £1,000 per person. For some people, staying in the country they have made their home will simply be unaffordable.

There is an issue with the sheer amount of paperwork required. If you are a tidy person who throws things away, then you may have some problems proving that you are eligible.

If you haven’t applied yet, then do start collecting your paperwork. Don’t throw away your water bills, expired passports, rent agreements, payslips, medical letters etc. I hereby make a public apology to my wonderful husband who I have previously accused of hoarding. Oh, how wrong I was and how grateful I am now to those boxes full of paperwork that he insisted on keeping. You never know when you might need to show your whole medical history to a perfect stranger. A stranger who has your fate in their hands.

The above are all personal, nowhere near legal and probably not a comprehensive list of deliberations about the situation that we find ourselves in now as EU migrants living in the UK — and not to forget British citizens living in the EU as well.

These rights must be without discrimination, accessible and affordable for all.

We shouldn’t have to ask the UK government to guarantee the rights that we already have. They should be using this time as an opportunity to guarantee all our rights, not take them away.