'How long can we tolerate this situation?' Stories from the Greek islands' refugee camps 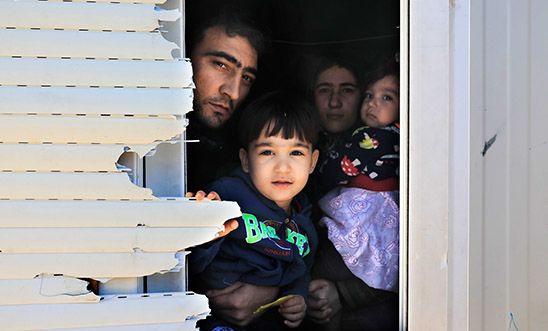 We have spent this week travelling across the Greek islands of Chios and Lesvos to document the conditions that thousands of fleeing refugees are living in right now. They are all waiting to find out if they can continue their journeys to safety.

Make no mistake – it is winter here too. It has been miserably cold and wet for months, and it’s not over yet. That’s why we’re urging the Greek Prime Minister Alexis Tsipras to move everyone to the mainland where they can be better looked after as they await their fate. Demand that he takes action by tweeting at him now:

There are 15,000 people currently stranded in the Greek islands, the vast majority having fled from their war torn homes. Following a deal between the EU and Turkey in March 2016, thousands have been forced to remain there for months on end as the Greek authorities hope to hurriedly send people to Turkey. The agreement is based on the premise that Turkey is a safe country for Syrian refugees – which it is not.

The deal has been hailed as a success by many since it reduced the number of people arriving in Greece. But in reality this is yet another way for the EU to shift its responsibility towards refugees onto other countries. It also condemns thousands of very vulnerable people to appalling conditions.

We’ve spoken to dozens of people during our visit – many have arrived alone, while others with their young families in tow. They have come here from all over the Middle East and North Africa and beyond, including from Syria, Afghanistan, Kuwait, Eritrea and Somalia. 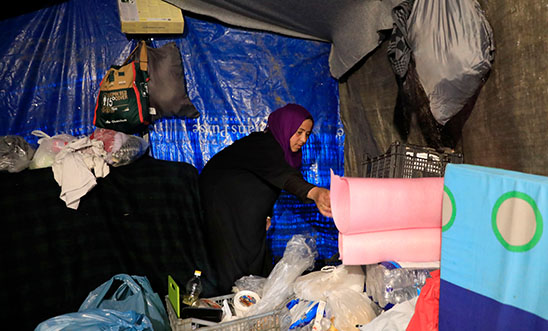 Before coming to the camps, they all had real lives like anyone else. They were engineers, bakers, shopkeepers, construction workers, farmers, lawyers, students, teachers and more. But in the face of extreme danger, they have been forced to flee their homes and now find themselves in the camps of Vial and Moria in Greece.

The Vial camp on Chios hosts about 2,000 refugees. Some – if they’re ‘lucky’ – get to live in what looks like a shipping container. These dwellings are dry and solid, though still often freezing, particularly at night. The rest must make do in a large canvas tent that contains dozens of self-made rooms from blankets. Each one has several people inside, and they are pitch black as extra blankets are draped over them for insulation and privacy. 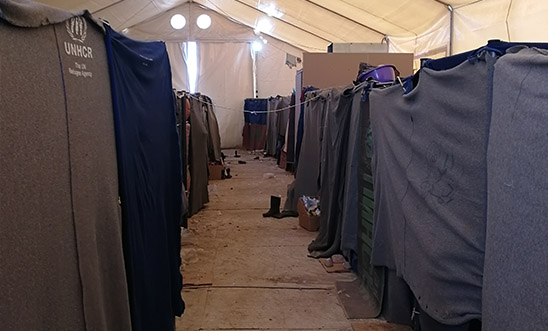 In fact, countless refugees tell us how cold it gets at night, and that it keeps them awake. Either from the bitter chill itself, or from the noise the wind makes while whipping violently against the canvas that shelters them. The sheer exhaustion from weeks or months of broken sleep shows clearly on their faces.

We speak with an Eritrean man called Saare*, who claims that other nationalities get priority in being moved out of the camp, and he just doesn’t understand why. Sadly, tensions between different groups is a reality of people being forced to live together under very difficult circumstances.

Saare is here with his wife, sharing a container with a dozen other people. He says they want privacy, but of course they don’t get any here. Their appointment to find out what happens next is not until March so they’ll just have to wait it out.

We speak to an 18-year-old Kuwaiti man called Doumi who has been in Vial for four months. He came here via Turkey on a boat with 60 people, some of whom died along the way. He came alone and says he can't even begin to think of his future – for now he can only think of getting out of here. It’s devastating to see such a young person – who should have all the potential in the world – with such little hope for themselves.

We also speak to a warm Syrian couple who invite us into their tent for a chat, laying down blankets for us to sit on. It’s amazing that people have the patience to remain hospitable even in here. The woman, Haya, might have breast cancer – they show us her X-rays that they keep in an envelope they brought from Damascus. She says that the camp doctors are taking it seriously, but she worries that they are being too slow to help her. Her husband Joram says he just wants to care for his wife, and for their children to go school. 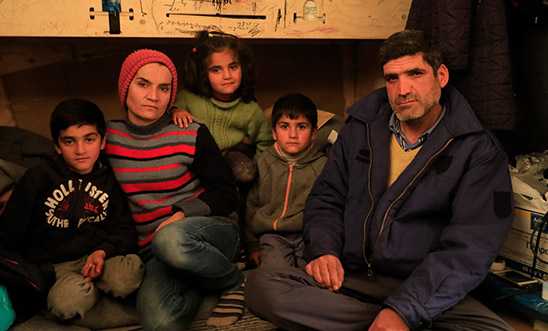 What is striking, yet unsurprising, is that every parent we have spoken to gives little thought to themselves and their own futures. They simply want a better life for their children: for them to be safe, warm, and for them to get an education. It’s not too much to ask for, but everyone here is battling hard to get it.

'I want to go to school to start again'

We then meet with a young Syrian man names Sayid, who is in his early twenties. He’s been here for three months, after being forced to leave behind his wife and their eight-month-old baby. Sayid wants to bring them here, and he worries about his parents, who he hasn’t spoken to for 20 days, after their village was damaged in a plane attack. He says he has money, he just needs the papers to leave the island. He wants to be a teacher: 'I want to go to school to start again.'

We ask Sayid if we can take a picture of him, but he says no. In fact, many people we spoke to declined to have their photos taken by us. They’re scared that they might get in trouble with the camp guards. Obviously, they don’t want to be sent back home or have the process of being moved from the island delayed, so it’s safest to stay anonymous.

Urge the Greek government to take action on this apalling situation by tweeting at them now:

Possibly the least likely to leave the camps in a hurry due to being deprioritised are the men who arrive alone. Not being classed as ‘vulnerable’ (a tag reserved, for example, for pregnant women or those with health problems deemed serious enough), they can languish in the camp for well over a year. 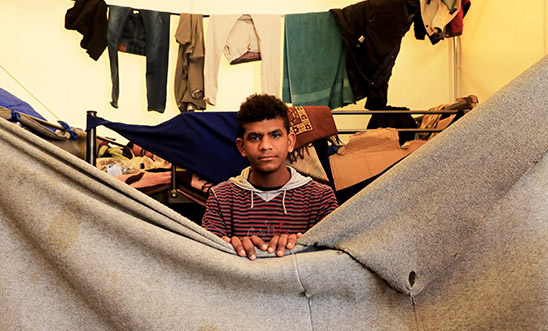 In Moria (on the island of Lesvos), we meet a young Afghani man called Jaah, who jokes about how being here has aged him so that he now has grey hairs. But his quips take a heartbreaking turn when he says he used to think about working, studying, travelling – but now doesn’t think about any of that. 'Stay here a week and you start to go crazy,' he tells us.

Jaah is part of the Afghan community within Moria – a camp housing up to a staggering 7,000 people, almost three times its capacity. The Afghans are ‘led’ by an older man called Abdul. He is clearly protective of the younger ones, and they seem to regard him as a father figure. Abdul is angry that the men here are often waiting months or years only to have their asylum requests rejected and be sent home. He wonders why they can’t be told any earlier instead of having their time wasted. 'We’re human, how long can we tolerate this situation?' he asks.

In Moria today speaking with people and documenting the conditions. Sunny day, hundreds of children around us, authorities say 5k people in total including 1,000 kids #opentheislands pic.twitter.com/mNdaNEhfDS

Also on Moria, we meet a 30-year-old woman from Yemen called Adelina, who describes the scene of a disturbance that broke not long ago. She lives in a women-only section of the camp, but one night men started throwing rocks and breaking the fences and windows surrounding her area. The men were walking around with their faces covered, breaking into the women’s containers and stealing things. The women in their container stayed and pushed beds in front of the door until it was safe to leave. 'Police threw tear gas and we had tears falling down our faces while we were still in the room – we didn't know what it was.' The police then left at 1am, while the situation was still ongoing – and they didn’t come back until 6am.

Too many stories to tell

We read about refugee numbers in the news, but it’s important to recognise that there are countless shocking, grim and unique stories here. Too many to tell.

Like the story of the parents who were given nappies and milk for their babies in the first month of their stay, but not since.

And that of the meals being poor and just too small to keep you full until the next one.

Or of the sheer boredom of just waiting for however long it takes to either be moved on or moved back home.

Or of being too scared to go to the bathroom at night because you don’t know who’s going to be in there.

The stories of waiting to see a doctor from 4am, only to be brushed off hours later with a couple of pills that don’t help you very much.

Or of the hundreds of children forced to spend part of their childhood away from school and into the mud.

And of depression and anxiety spreading through the camps like wildfire.

Those stories of parents, siblings and children left behind in their home countries, but still hopeful that one day they’ll be able to bring them over to a new life.

Or of heavily pregnant women sleeping on the floor in a tent because there’s nowhere else for them to go.

And the stories of the thousands more we didn’t get to speak to. 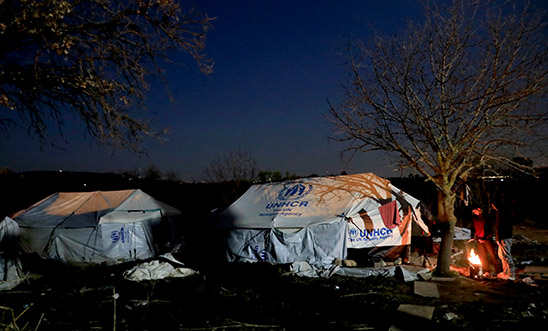 As someone visiting the camps, it difficult to get your head around the fact that actual human beings will spend even one night living like this, let alone weeks, months – even years.

People are being trapped here, with their lives put on hold. They are in limbo, awaiting what could be a terrifying fate of having to go back to the dangers they risked everything to escape.

If they’re lucky, they’ll get to set up a new life somewhere safe, but either way they might not know for a long time. 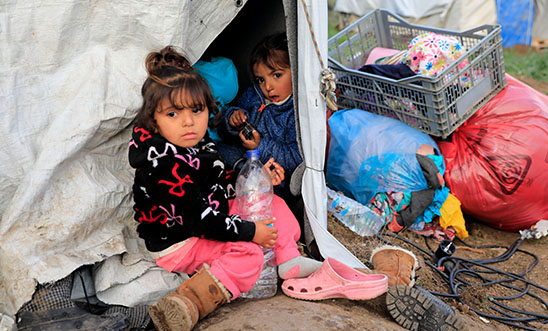 It’s not right – they need and deserve hope for a better future. Urge the Greek Prime Minister Alexis Tsipras to act now by taking the first step of moving the refugees off the islands: