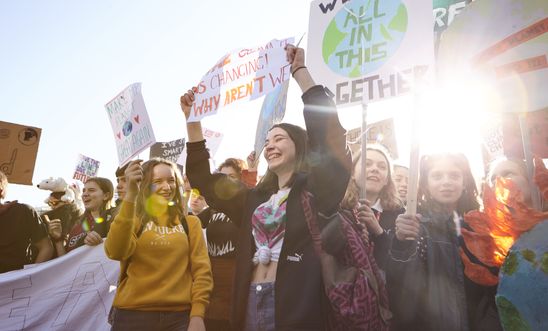 Inspired by the initiative of Swedish school student Greta Thunberg, young people around the world are raising their voices to demand governments take urgent action on climate change. Because of this, members and supporters of Amnesty International will be amongst those involved in the next demonstration.

Young people have already shown that they have the agency to make this decision and should be empowered to decide whether to participate or not.

The young campaigners have also expressed their feeling of being excluded from participating in the struggle against the climate crisis. As a movement that champions Human Rights Education we know that striking from school poses challenges and dilemmas for educators.

Yet already creative solutions are being found. Some schools have opted to recognise that participation in a campaign for the safety of our living environment is an example of active citizenship and are marking non-attendance at school as authorised. Others have been actively helping to organise events in or nearby to schools.

Yet we must not allow the debate or discussion around the youth-led initiative become overshadowed by debate about their choice of tactics.

Young people are simply asking that governments do what they have globally agreed is necessary: to take action to limit global temperature rises to 1.5 degrees, the level regarded as comparatively “safe”. Beyond this, and the violent impacts of a changing climate – which are already beginning to be felt – could dangerously descend in to chaos.

As adults in positions of political power have failed to take action to keep the world safe, surely it is time to support the studious young people who are responsibly telling it like it is.

As Thunberg pithily put it at a recent rally: “We are striking because we have done our homework and they have not.”