You did it: 131 MPs voted for the Refugee Family Reunion Bill! 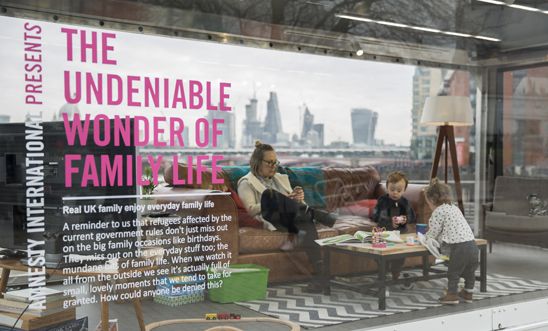 Today, the Refugee Family Reunion Bill had its second reading in the House of Commons - and passed to the next stage! This takes us one giant step closer to reuniting refugee families.

We needed at least 100 MPs to vote in order for the Bill to pass the second reading. We're delighted that 131 MPs supported bringing refugee families together - thanks to months of phone calls, letters, emails, events and MP visits by thousands of people up and down the UK.

Thank you for raising your voice - you've been heard!

YOU DID IT! - The Refugee Family Reunion Bill passed! 129 MPs voted "AYE" to bring refugee #FamiliesTogether. Thank you for raising your voice - you have been heard! pic.twitter.com/dWRSUWaCmH

Enough MPs have voted for the Bill to be heard and @AngusMacNeilSNP, the Bill's sponsor, is now speaking #FamiliesTogether pic.twitter.com/JRDrHZz37T

Refugees have benefited almost all of us, directly or indirectly, one way or another, across a range of sectors. Pleased to be in the Commons today to support the Refugees (Family Reunion) Bill #FamiliesTogether pic.twitter.com/YiggZtpLhl

I’ll be supporting #FamiliesTogether today. Allowing vulnerable families fleeing war and persecution to be reunited in the UK is the right thing to do. pic.twitter.com/kNucMqfnxN

In chamber now to support this important bill. #FamiliesTogether https://t.co/pNQcVMM5aT

Pleased that today the second reading of the Refugees Family Reunion Bill is taking place. I will continue to closely follow this important issue. #FamiliesTogether https://t.co/tMC6do8jBI

What is the Refugee Family Reunion Bill?

The current UK laws on the rights of refugees are restrictive and unfair. They mean mothers, fathers, brothers and sisters who have lost everything in the wake of the war and persecution, also lose their family. They don’t just miss out on the big family occasions like birthdays. They miss out on the everyday stuff too; the mundane but wonderful bits of family life.

The Refugee Family Reunion Bill would change all of that:

Young people who have turned 18 and elderly parents would also be able to live in safety with their families here.

More than 13,000 people emailed their MP asking them to show up and vote today. Many people wrote letters and hundreds of you tweeted your support for #FamiliesTofether.

Great to see so many STARs out there campaigning to bring refugee #FamiliesTogether. Let's make it happen! See what they've been up to... https://t.co/nJxSjqH7Qo pic.twitter.com/XhcuwaX0O3

The Wonder of Family Life

To raise awareness of the UK’s strict and unfair rules ahead of the Bill reading, we turned family life into a living art installation on London’s Southbank. Real families spent time in a living room inside a big glass box, just doing everyday family stuff like watching a film, or playing a board game, or having a pizza...oblivious to the fact they’re in an open public space, in central London, surrounded by hundreds of people.

When we watch it all from the outside we see that family life is full of small, lovely moments that we tend to take for granted. How could anyone be denied this?