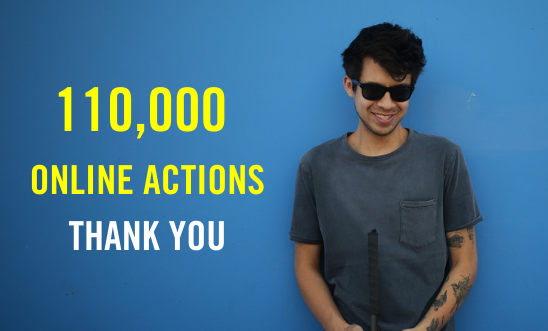 Over 110,000 of you used your power as part of Write for Rights 2020 to stand up and seek justice and freedom for some amazing people. Whether signing petitions, writing letters or emailing authorities - your actions have been heard across the world.

This is the difference we’re making...

23-year old student Gustavo Gatica was protesting against inequality in Chile when he was shot in the face by police. Gustavo permanently lost his sight. But the police responsible for the shooting have never been held to account. Over 30,000 of you emailed the Chilean authorities demanding a proper investigation. Because of your actions, we’ve managed to keep the spotlight on Gustavo’s case, and it’s now used around the world as an example of violence by the Chilean police force. We’ll be continuing to fight for justice with Gustavo.

Nassima fought for women in Saudi Arabia to have the right to drive, and won. She’s now been in jail for over two years for her activism. Thanks to your actions, last month’s G20 summit hosted by Saudi Arabia was overshadowed by calls from international human rights groups to free Nassima and the other women human rights defenders. While Nassima remains in prison, we will continue campaigning for her immediate and unconditional release.

Biology students Melike Balkan and Ozgür Gür defended their right to celebrate pride on their university campus at the Middle East Technical University (METU). They faced nearly three years in prison. After repeated postponements of their trial, on 8 October they were acquitted and their ordeal is finally over. More than 445,000 actions were taken for them during the campaign.

Germain is serving a 32 year prison sentence in Burundi. His awful crime? Being a human rights defender. Close to 20,000 of you have emailed and taken action on social media calling on the President of Burundi to release Germain. In 2021 we will continue campaigning to help get Germain back to his family.

Thank you to the thousands of you who used your power to campaign for these incredible people. All of the actions that you have not only helped heap pressure onto authorities but also let Gustavo, Nassima, Melike & Özgür and Germain know that we are standing with them in their fights for freedom and justice.