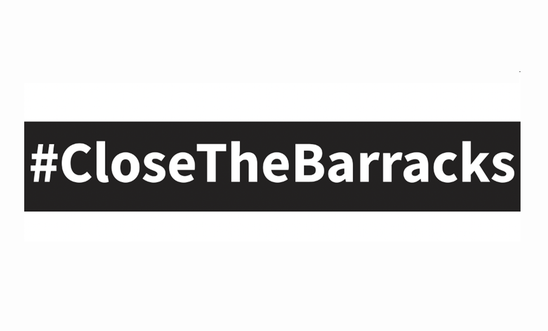 Last September, the government turned a disused barracks just outside Folkestone into accommodation for people seeking asylum and housed 400 people there. Conditions at the barracks were totally unsuitable.  Despite the pandemic, residents slept in beds just a few metres apart with around 15 to a room and sheets hanging between them. At times, 34 people had to share one shower and one toilet.  While residents were free to come and go, the barracks were surrounded by a barbed wire-topped fence, a chilling reminder of what some of them had fled.

It wasn’t long before residents began to protest about the conditions, gathering outside the premises, shouting “freedom” and waving banners.  Many went on hunger strike and took to sleeping outside, despite the cold, to try to avoid the dangers of contracting COVID-19.  The Government response was to say that it took the wellbeing of asylum seekers “extremely seriously”.

On 29 January, there was a fire at the barracks, leading to residents saying they suffered electricity and hot water supply cuts.  Thirteen men were arrested.  Before a police investigations had taken place, the Home Secretary appeared to jump to her own conclusion about the cause, with a statement that “the damage and destruction at Napier barracks is not only appalling but deeply offensive to the taxpayers of this country who are providing this accommodation while asylum claims are being processed”.   An open letter signed by people seeking asylum at the barracks expressed sorrow and sadness at the fire and called on authorities to see people in camps as "human beings and desperate people".  In March, the men who were arrested were released without charge.

A photographer was arrested and detained for over five hours after taking photos of a protest at the barracks.  His mobile phone and memory card were confiscated before he was released on bail on condition that he stay away from the barracks.  There have been no charges against him and the bail conditions were dropped.

During the week of 15 February, borders and immigration and prison inspectors visited the barracks to assess the conditions there.  So far, only their headline findings have been published, but these are damning.  The list of concerns was long. Amongst other things, the inspectors found that the site had been opened before public health recommendations had been actioned; a large scale COVID-19 outbreak was inevitable given the cramped communal conditions; the environment was impoverished, run-down and unsuitable for long-term accommodation; cleanliness was made difficult by the age of the buildings; and not knowing how much longer they would be in the camp had caused the residents major distress.

When reports of the conditions at Napier Barracks began to emerge, campaign organisations called for the barracks to be closed and the residents rehoused in safe and healthy alternative accommodation.  Our own Kent Network, launched only last year, joined these calls, writing to MPs across the county, raising awareness of the issue in social media and writing to the local media.  Some of the government’s decisions suggest that the pressure is beginning to tell.

Despite this, the Home Office have said that they intend to continue to use the site.  According to reports, they are planning to move the remaining residents to alternative accommodation by the end of March, but to accommodate more people in the site from April.  Many MPs on the government side have not responded to requests from activists for online meetings to discuss the issue.

We are therefore ramping up the pressure.  We support the day of action on 19 March at 1pm, to #CloseTheBarracks - an online Zoom rally to tell the government to close the barracks and to call for refugees to be welcome.

Today we're supporting the Day of Action to #CloseTheBarracks.

We call on @PritiPatel
to: