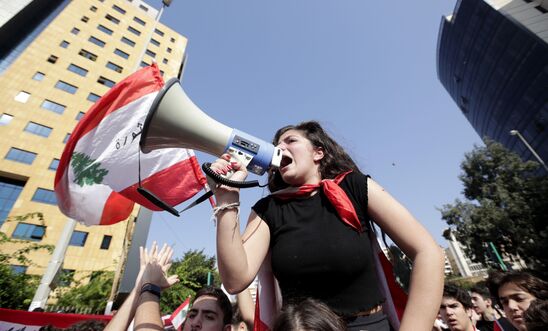 A Lebanese student taking part in an anti-government demonstration in Beirut in November 2019. Since October 2019, people in Lebanon have been calling for an end to the endemic corruption and for the ruling elites to immediately resign. © ANWAR AMRO/AFP via Getty Images

Jonathan Dagher is a journalist and video producer at the Lebanese independent online media platform Megaphone News. He has contributed pieces to Zenith Magazine's Lebanon Chronicles and the Middle East Eye. He is also a producer on the Shabaket al Meem podcast with the Arab Institute for Women and author of a research study on the digital threats facing women and members of the LGBTQ+ communities in Lebanon. In 2019, he participated in Reporter Without Borders Berlin's Scholarship Programme on digital security for journalists. He tweets at @Jonathan_Dag.

Drastic problems require radical solutions. In Lebanon, corruption and impunity are our system’s pillars rather than mere side-effects of its incompetence. The ruling regime draws its continuity from them.

To truly challenge them, we must acknowledge the failure of that system, dismantle it, and build it anew.

Sectarian leaders have infiltrated government institutions, carving out resources from within and monopolizing services since the state’s inception. Citizens have to pledge loyalty to these leaders, in and out of the voting booths, in exchange for their rights, for the reward of receiving ‘favors’ that should’ve been theirs to begin with. As such, sectarian clientelism became the regime’s lifeline, and democracy, a lion without teeth.

Most people want an end to corruption, that much is true since the 2019 uprising. But it is impossible to achieve from within as long as the regime maintains its grips on all tools of accountability. It has hijacked them. The judiciary? Crippled after years of allegiance-based appointments. Public education? Defunded. Private education commodified. Journalists bought, intimidated, or assassinated. Unions co-opted. Activists attacked. Protesters arrested, beaten, or killed.

To dismantle corruption, impunity, and - essentially -  injustice, we need to engage with that violence and resist it by all means: protests, riots, and words. We need to protect the media outlets and journalists documenting the violence, exposing it, destroying its authority, and insulting it.

Change from within is stunted, and now is the time to imagine new ways of existing from without. The circumstances were once suitable to negotiate ‘reform’ with the regime (it’s their favorite word), but that option died on August 4 when one of the biggest non-nuclear explosions erupted at the Beirut port. Today, our public institutions are hijacked by an occupying force that places no value on life and therefore, we need to dismantle it.

We need to affirm that the regime’s laws and decrees are considered invalid until we reclaim all tools of democratic accountability. We need to redefine our ‘We’: erase the lines demarcating sects and replace them with intersectional networks of social and economic welfare and cooperation. These should be built on the basis of a decentralization that liberates economic and social policies from the hegemony of the central government. We need to build alternative syndicates and independent governing bodies, to prioritize the needs of racial, gender, and sexual minorities, to build a new system that imposes itself with trust.

In the short term, we need to choose representatives without the shackles of the regime’s electoral laws and its clientelist webs, and we need to give these candidates our legitimacy from the streets. Later, we need to rebuild the state on solid democratic ground, reclaiming government, schools, courtrooms, and syndicates. As for the international community, it should acknowledge the revolution and its voices, withdraw support from the central government, and protect Lebanon from foreign aggression.

Anything short of the above fails to address our problems, in my opinion. If the claim seems radical, one only has to look at Beirut, or what’s left of it after years of compromise.

Click here to watch Megaphone News' short explainer video on the Beirut blast, its causes and its aftermath.