Lebanon: Don't let the criminals be the judges 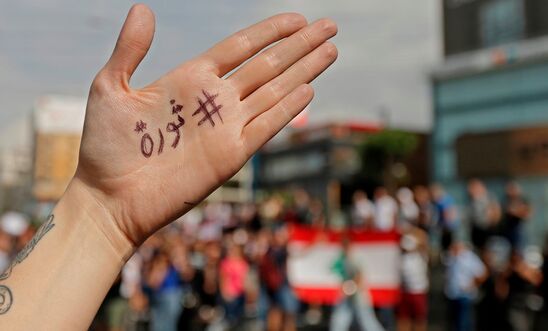 A Lebanese demonstrator displays the word "Revolution" in Arabic on the palm of their hand during a protest against dire economic conditions in Zouk Mosbeh, north of the Lebanese capital Beirut in October 2019 © JOSEPH EID/AFP via Getty Images

Joey Ayoub is a Lebanese writer and activist currently based in Switzerland. He tweets at @Joeyayoub.

The August 4 explosion exposed the lethal recklessness that has come to define the ruling establishment in Lebanon. We are still dealing with a war government even though we are supposed to be in the postwar era. The original sin is how the postwar era was ushered in by explicitly opposing accountability through the passing of an amnesty law. Now, we risk seeing the exact same mechanisms adopted to give the ruling political class a way out of any legal accountability. Without an international independent investigation coupled with an independent aid mechanism, the same networks that have been developed over the decades to funnel money from abroad will be strengthened once more.

No domestic investigation will be trusted because those greenlighting the investigation are all implicated in the crime being investigated. It really is that simple, even though a lot of efforts will be put into making this more complicated than it actually is. Lebanon has a long history of targeted assassinations and war crimes, the vast majority of which were never prosecuted. Those currently in power are mainly former warlords who benefited from that fact, in addition to current warlords who have expanded such practices and who depend on corruption in order to do so. In other words, accepting a domestic investigation is to accept that the criminals be the judge.

There are already those arguing that figures such as the president and speaker of parliament will never accept to be put on trial, and that is true. But to accept this as a fact that can't be challenged is to accept that accountability does not apply to the Lebanese people, which sends a very different message to protesters and activists on the grounds, namely that no one will stand by them.

Similarly, aid that goes through the government risks being funneled into their pockets. This is also neither new nor unusual in Lebanon. Various politicians including the most high-ranking ones have regularly adopted this model, and it is not exactly a secret in the country. This is why we must insist that aid reach institutions such as hospitals and the various collectives and initiatives directly. Many businesses won't survive the ongoing crisis, which is why hundreds of fundraisers have been set up to help them survive. As the immediate burden is primarily financial, direct aid can go a long way in mitigating the disaster.

The August 4 explosion has changed Beirut and Lebanon permanently. As activists, we are painfully aware of the fact that time is not on our side because the ruling establishment has perfected the waiting game. They no doubt are aware that we cannot protest all the time. The combination of the economic crisis and the Covid-19 pandemic, in addition now to the explosion, has put great strains on households in Lebanon to such an extent that famines are no longer hauntings of the past but very much a possibility in our future. At this rate, we risk seeing a lost generation through waves of emigration on a scale not seen since the civil war, and the continued decline of the country.