The Human Rights Act Should Stay 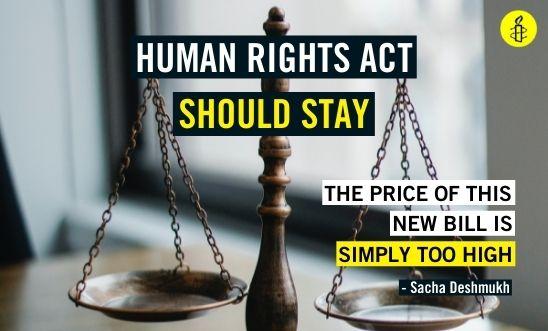 Written by Amnesty International UK Director Sacha Deshmukh, first published in The Times on Thursday May 12 2022

For all the spin about increasing the right to freedom of expression or trial by jury — both of which currently exist — Dominic Raab’s UK bill of rights promised in the Queen’s Speech will be a shadow of its predecessor.

The justice secretary’s proposal is based almost entirely on stripping out parts of the Human Rights Act that the government does not like, and by no coincidence, the most operative ones. This is a daylight raid on rights, dressed up as an improvement by a government that abhors scrutiny and challenge. The public must not fall for it.

If the government’s consultation is anything to go by, the bill of rights is set to “restrain the imposition and expansion of positive obligations”. These obligations apply to all public authorities making it incumbent on them to take positive steps to protect rights rather than merely restrain themselves from violating them.

For example, they are integral to the ability of families to secure effective inquiries into deaths where the state may be responsible, such as the Covid inquiry. They are also vital to the ability of victims to hold the police accountable for serious failures in conducting effective investigations in rape cases, such as the John Worboys offences. It is ill-judged to countenance stripping away this sort of right at the moment when public trust in the police and the political establishment is at rock bottom.

Meanwhile, with its determination to sever ties between UK courts and Europe’s human rights court, the government insists that rights contained in the bill will differ from those found in the European convention and need not be interpreted in line with the Strasbourg court. This risks breaching the Good Friday Agreement’s stipulation that European convention rights be incorporated into Northern Irish law, and thus further threatens the already fragile peace settlement.

Despite the government’s commitment to remaining a signatory to the European convention, it undermines the legitimacy of the Strasbourg court by claiming it is going beyond its legitimate role, which ministers seem to think should not have evolved since the 1950s, and that parliament requires a “democratic shield” against adverse Strasbourg judgments.

In recent years, countries such as Russia, Hungary and Poland have taken the same steps and cited the same justifications. Hardly a club we would wish to join.

The conflict in Ukraine has brought many uncomfortable realities to the fore. Countries around the world are being asked what they stand for. If the UK is serious about defending human rights and international law, it simply cannot be seen to be taking an axe to protections at home and undermining the most significant rights institution in Europe.

The Human Rights Act should stay. The price of this new bill is simply too high.