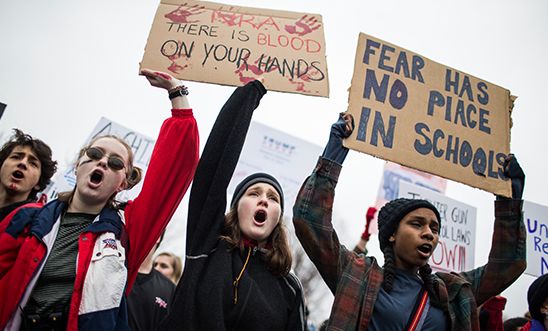 Sadly, the United States has become somewhat infamous for school shootings, but there’s a crucial point missing from the gun violence debate: saving lives is not a policy choice for elected officials to consider or ignore.

It is a legal obligation on the US government under human rights treaties that the country has committed to abide by.

Of course, a key challenge is how to enforce these obligations and that’s where activism – like the youth-led March for Our Lives on March 24 in Washington DC and across the world – plays a critical role.

People must demand that elected officials respect, protect and fulfil our human rights –  including those of people most impacted by gun violence: youth, women and people of colour.

There is plenty that can be done

In that context, there are several steps that the US government can and should take to protect people’s lives from gun violence.

No elected official should ever claim that there’s nothing that can be done to stop gun violence. It’s the opposite – there’s plenty.

The US government can and should:

1) Pass universal background check legislation that guarantees a minimum standard across the country, ensuring firearms are not accessed by individuals at risk of misusing them.

6) Reform the criminal justice system to ensure all aspects of law enforcement, including policing, prisons, and judicial systems, are human rights-compliant and not themselves contributing to the problem.

7) Ensure that the human rights of communities most-impacted by gun violence are respected, protected and fulfilled.

8) Provide funding for direct services, especially those in the most impacted communities, to address the physical and psychological health impacts of gun violence.

9) Ensure that gun manufacturers adopt measures to minimise the risk that their products are used to violate human rights.

10) Defeat National Rifle Association funded proposals such as those eliminating safeguards and oversight on the purchase and transfer of firearm silencers, plans to arm teachers, and making it easier to carry concealed weapons across the US.

What next? Join us at the London March for Our Lives event on Saturday 24 March, and tweet at Donald Trump to demand common sense gun reform in the USA.