5 reasons to get involved with the Human Rights Act Consultation 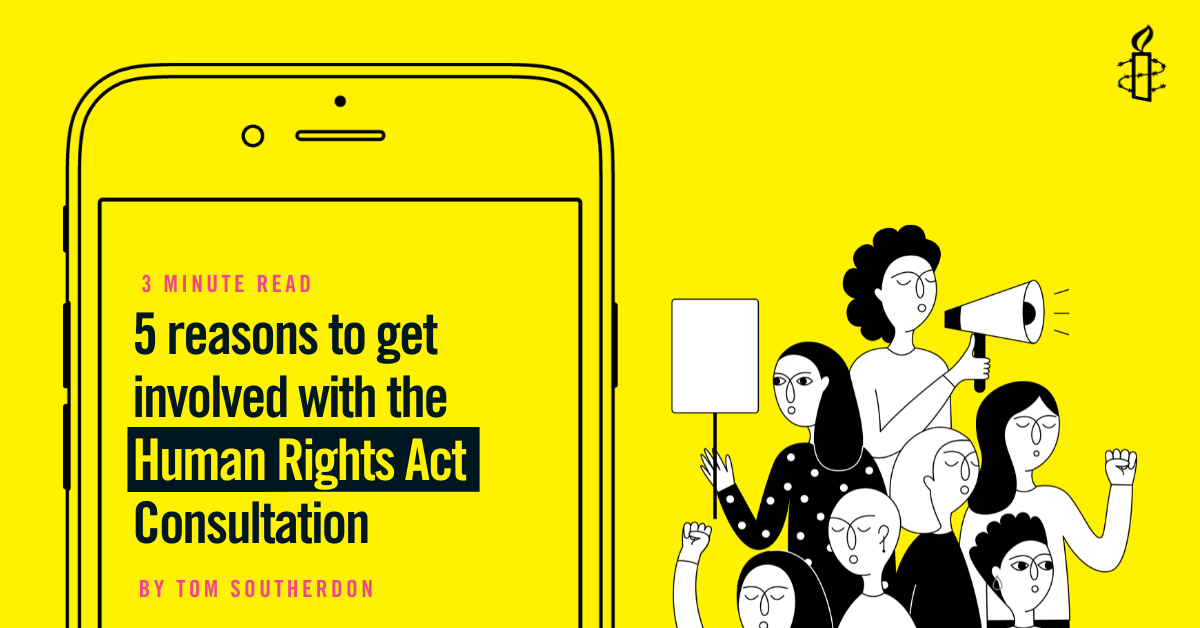 The UK government is running a consultation on plans to scrap the Human Rights Act and replace it with a Bill of Rights. We are concerned that the proposals would severely weaken rights protections in the UK and make it much harder to hold the state to account. Behind all of the technical language is a move to gut the Human Rights Act and limit not only what rights are but who gets them.

Consultation documents like this can seem daunting and you might wonder why it’s worth responding to them. But here are five reasons why you should:

1. The proposals will weaken our human rights

The ‘Bill of Rights’ would involve redefining rights so they don’t mean the same as at the European Court. Our rights could be limited by Parliamentary votes, and unpopular groups could be barred from using human rights at all in some cases. The proposals would also impose barriers that would make it even harder to take human rights cases to court.

The proposals will make the UK’s human rights protections weaker and more difficult to use.

The UK government’s plans are in direct contrast with the direction of human rights law in Scotland, Wales and Northern Ireland, where they are actually looking at ways to improve rights protections. The plans risk undermining the Northern Ireland peace agreement as well as the political and policing structures flowing from it.

2. The government should know the Act has public support

The government is doing this because it wants to increase its support. They think that the Human Rights Act doesn’t have support from the public. Years of misleading media stories about the Act have given that impression. We need to show them otherwise.

3. Your response can make all the difference

This isn’t a done deal. While some questions are misleading, this isn’t yet a settled policy and some are more open. It is also clear that, while it may have an agenda to reduce rights protections, the Government doesn’t have a fully formed idea of how to get there. Enough responses showing them how wrong-headed some of the biggest proposals are could make all the difference.

4. The government doesn’t really want you to

When countries around the world develop a national Bill of Rights, they usually try to build consensus and a sense of unity around the document by gathering, listening to and reflecting views from across their society. There is usually some kind of inclusive, open and positive process. That is not what we have here. Instead we have a long, densely worded and frequently misleading consultation document with an anti-rights agenda. There is little attempt to publicise or openly discuss what it contains. It is our job to tell the government what it doesn’t want to hear.

5. We’ve made it easy to get involved

We’ve created this guide to help respond to the consultation. It selects 14 of the most crucial questions and gives you all you need to know about how to respond to them. You can do the 14, you can do less, you can do more. The important thing is that you make sure that the government hears your message that they should get their hands off the Human Rights Act.