Reform of veto is key to restoring Stormont and delivering rights 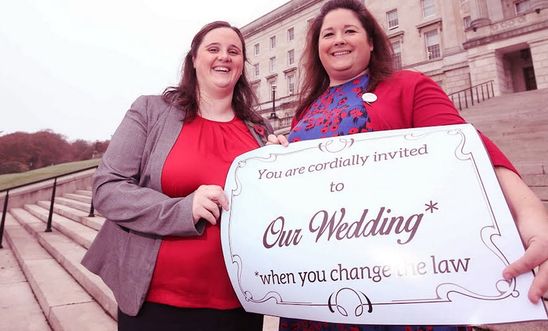 Jayne and Laura want Stormont to change the law

Its return has been hampered by the absence of agreement between Sinn Féin and the DUP over how to address a raft of matters, including human rights issues such as marriage equality. The last time this issue reached the floor of the Northern Ireland Assembly, the DUP - the region's largest party and now a prop to Theresa May's government at Westminster - overturned a majority vote in favour by submitting what is known as a ‘petition of concern’.

The petition of concern – the veto mechanism at the NI Assembly – exists for understandable reasons: to prevent the excesses of majoritarian politics in a place where politics has been largely based on the representation of competing communities.

But its use has gone far beyond the original purpose conceived by its originators, the architects of the Belfast / Good Friday Agreement. The petition of concern is described under the safeguards section of the Agreement: “to ensure that all sections of the community can participate and work together successfully in the operation of these institutions and that all sections of the community are protected”.

But one section of the community which has felt excluded from these protections has been LGBT people in Northern Ireland. They have seen the petition of concern wielded to deny them access to civil marriage, despite majority support within the Assembly.

When Stormont voted on the issue in November 2015, a narrow majority of 53 to 52 MLAs backed marriage equality, only to see the DUP lodge a petition of concern to overturn the decision.

Given the probability that roughly equal numbers of unionist and nationalist LGBT community members would want to get married, that identical protections would be built into legislation to protect Protestant and Catholic churches (as well as other religious traditions) from being affected by widening access to civil marriage, and the support of most nationalist and unionist voters, it is difficult to see which particular “section of the community” was being protected in this case.

Meanwhile, politics has moved on. The Stormont Executive collapsed a year ago and the subsequent election in March 2017 returned a significant majority in favour of equal civil marriage, with somewhere between 55 to 57 out of 90 MLAs now in support, reflecting the 60-70% of the public which polls consistently tell us back the measure.

But, with only 30 signatures required to trigger the veto, that rump of 33-35 MLAs is still sufficient to veto a law to bring Northern Ireland into line with the rest of the UK and Ireland. Counting the bloc of 28 DUP MLAs, only two other MLAs would be needed to block the overwhelming will of the Assembly.

Given the prominence of marriage equality as one of the issues stalling a restoration of the Executive, it is not too fanciful to predict that any such move could trigger a political crisis, with yet another Stormont collapse possible as a result.

If there is to be a return to Stormont, it is in the interests of both major parties – and indeed, everybody else – that the institutions are restored in a way which are sustainable. For the DUP, that means being able to get back into government with a sense of confidence that the political rug won’t be pulled from under their feet, and with Northern Ireland seen as a political entity seemingly forever in crisis. For Sinn Féin, it means that their support base sees delivery via Stormont where before there was none. For both, that means sorting out the petition of concern as a precursor to a return of devolution.

The two major parties – and others – have already accepted the principle of needing to fix the petition of concern, suggesting that they understand that its use has been damaging the credibility of the institutions.

In 2014 a Stormont committee considered various ways to reform or replace the mechanism, but failed to reach consensus on exactly how.

Then, in November 2015, as part of the Fresh Start Agreement, the DUP and Sinn Féin agreed a new protocol around its usage.

However, the protocol itself was a fairly meaningless attempt at reform, simply committing the two parties to a voluntary agreement to limit use of the veto to “exceptional circumstances” and requiring petitioners to explain in writing why it was being lodged. The proposed changes, such as they were, would certainly not have prevented opponents of marriage equality from using the petition of concern to block law reform.

In any case, the change never came into effect. Sinn Féin and the DUP committed to submitting the agreed protocol to the Assembly Speaker by mid-December 2015, but have never done so.

When Naomi Long put reform of the petition of concern as one of her preconditions for Alliance joining in the Executive in May 2016, she reportedly got fairly short shrift from the two big parties. The rest, as they say, is history.

A year on from its collapse, for the parties to re-establish the Executive as a stable government for the whole community, they will need to demonstrate that something meaningful has changed about how Stormont does business. In part, that can happen through reform of the petition of concern, restoring it to its original function as a bulwark against legislation which might disadvantage one of the two main communities.

Doing so need not require the loss of face by either party. Sinn Féin needs to demonstrate that rainbow placards on lampposts were about more than electoral gain, without losing what is perceived as a valued protection for the nationalist community. Reform of the petition of concern as part of a wider deal to restore devolution, rather than a can to be kicked down the road in some subsequent review process, can deliver both.

Arlene Foster has already said the DUP would be willing to abolish the petition of concern altogether. A reform of the mechanism could get the party ‘off the hook’ on marriage equality, with DUP MLAs able to demonstrate their opposition by voting ‘no’, while simultaneously upholding the abiliity of the Assembly to bring Northern Ireland into line with British legal norms, while a newly-interested Westminster and UK media look on.

One year on from the implosion of the Executive, reforming the petition of concern could help pave the way for a return not just of devolved government, but of its credibility to deliver on human rights.

And while Stormont can’t deliver for LGBTI people, our attention is already shifting to Westminster...