Free press under threat in Northern Ireland as journalists arrested 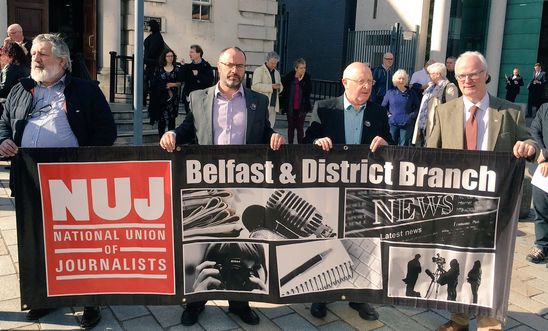 In two parts of the world this week, journalists found themselves behind bars for helping expose the involvement of security forces in the massacre of civilians.

When it happened in Myanmar, UK Foreign Secretary Jeremy Hunt was straightforward in his condemnation:

‘Imprisoning journalists who write about inconvenient truths is an unconscionable blow to press freedom – and indeed everyone’s freedom.’

Less noticed – and not at all condemned by government ministers - was the fact that two journalists have been arrested in Northern Ireland as a result of their efforts to expose the collusion of police in the massacre of civilians in a loyalist paramilitary attack on a country pub in 1994.

Trevor Birney and Barry McCaffrey, two of Northern Ireland’s most widely-respected and award-winning journalists, were arrested, their homes and offices raided, and their computers and documents seized, in an elaborate operation reportedly involving some 100 police officers.

The raids are in connection with a 2017 documentary film, No Stone Unturned, made by Oscar-winning producer Alex Gibney and to which the men contributed. The film shone a spotlight on police collusion with loyalist paramilitary group, the Ulster Volunteer Force (UVF), in a shooting on The Heights Bar in Loughinisland, County Down. The killers raked the quiet pub with automatic gun fire, killing six Catholic men as they watched the Republic of Ireland's opening match against Italy in the 1994 World Cup.

No-one has ever been prosecuted for the killings. A 2016 report by the Police Ombudsman for Northern Ireland found that police officers of the Royal Ulster Constabulary (RUC) had colluded with the killers and had helped them to escape justice after the massacre.

Despite the fact that the police knew who the suspects were from the start, and the getaway vehicle, a gun and a bag of balaclavas were all found, nobody was ever charged. On top of that, the police subsequently managed to lose or destroy much of the evidence.

While the Northern Ireland police have failed miserably to bring justice to the killers, they have now launched an investigation into how documents from the Police Ombudsman’s office allegedly ended up in the hands of journalists investigating police wrong-doing.

The arrests of the two journalists has provoked widespread concern among the media and human rights groups.

This morning outside Belfast’s High Court, I joined journalists from many of Northern Ireland’s main media outlets in a National Union of Journalists-organised protest against the arrests and to call for the threat of prosecution to be lifted.

Journalists have a legal right to protect their sources. It is a key tenet of their profession and underpins their ability to exercise their freedom of expression.

Unless the police can demonstrate that the arrests and seizure of the journalists’ materials were reasonable, proportionate and necessary in a democratic society, their actions amount to an assault on the freedom of the press.

Around the world, from Myanmar to Turkey, Amnesty International is naturally always concerned at the arrest of journalists, particularly when it involves those who specialise in investigating human rights violations. A free press is the cornerstone of a free country and essential in holding the powerful to account.

When journalists, rather than those responsible for the mass shooting of civilians, find themselves behind bars, we should all be concerned.

When it is happening in our own country we should be both outraged and outspoken.

You can add your name to the NUJ petition of support for the men here.