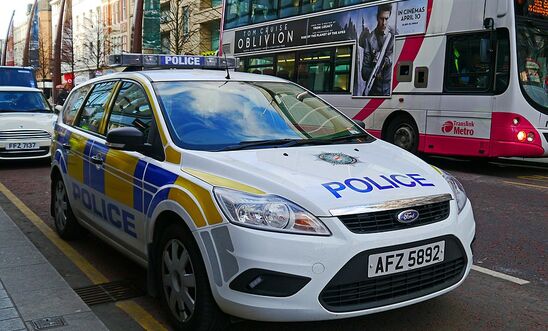 The last few years have seen a roll-out of spit hoods to police forces across the UK. Until this year, the exception had been the PSNI.

Despite lobbying by the Police Federation and requests by senior officers, the Northern Ireland Policing Board had withheld consent for their deployment due to questions over the human rights impact of the controversial restraint device.

For a long time, Amnesty International has raised concerns about spit hoods, also known as spit and bite guards, including the risk they may restrict breathing and cause extreme distress to the wearer. At the same time, the available peer-reviewed medical evidence points to a negligible risk of transmission of diseases such as HIV and Hepatitis from spiting and biting, raising serious questions about whether these devises are necessary for officer safety at all, a claim often made by senior police officers.

In March, we raised those concerns with the Chief Constable Simon Byrne, when he introduced the hoods, first to staff in custody suites and then to other frontline officers, in what he said was a health and safety response to COVID-19.

At the time, we strongly advised against the use of spit guards in the context of Coronavirus until specific guidance had been developed on the risks and effectiveness for police officers and members of the public.

There are potential risks in using these devices on individuals who are ill with COVID-19, or in recovery from it. It is known that COVID-19 causes severe breathing difficulties, including damage to the lungs and airways. Any use of force that can restrict or impair breathing in these circumstances therefore presents additional risks of adverse outcomes.  In addition, any struggle, panic, stress, or anxiety caused by the act of applying and using a spit hoods is likely to cause extra stress on the respiratory system irrespective of the breathability of the hood itself.

By design, spit hoods are designed to block spit, vomit, blood or other substances escaping them. So, when a wearer discharges a substance into the hood, the breathability of the fabric can dramatically drop, increasing the risk of significant breathing impairments and suffocation.

In addition, there are real concerns about officer safety. Amnesty’s policing experts warn that the process of fitting the hood, and the likely ensuing struggle would result in a ‘cloud of virus particles’ as the struggle is likely to be a ‘significant aerosol generating event’. Once placed over someone’s head, the spit hoods themselves would do nothing to prevent the further spread of the virus via coughing, sneezing or exhalation. The use of spit hoods may therefore not only fail to offer the promised protection, but could in fact place police staff in greater peril.

We asked the police to provide any evidence that the hoods actually prevented or inhibited the spread of the Coronavirus.

In a June 9th response, the PSNI acknowledged to Amnesty that the manufacturers explicitly declare that spit hoods provide no protection against COVID-19 spread, stating: “The product will not prevent aerosols from coughing or sneezing and is therefore not an effective means to prevent Covid-19.”

In light of this, we have asked the PSNI to suspend the use of the devices, and called on police forces across the UK to withdraw them from use in possible or suspected cases of COVID, pending detailed studies and evidence of their effectiveness and likely risks in using them. To date, this request has been refused. This is in stark contrast to other types of policing equipment that have to undergo rigorous medical and scientific testing before they can be authorised for use.

Meanwhile, John Wadham, the Policing Board’s independent human rights advisor, has completed and submitted his report into PSNI responses to COVID, including the introduction of spit hoods.

While the content of that report is not yet public, his review of the human rights issues surrounding the devices, contained in the recently-published Policing Board Annual Human Rights Report, suggests the PSNI have not met the threshold for necessity and proportionality, given the serious concerns around physical and mental health impacts.

It is of concern that the pandemic may have been used as a reason to introduce these controversial restraint devices in Northern Ireland in absence of detailed evidence concerning their effectiveness or adequate understanding of the risks involved, including to officers themselves. The introduction of these restraint devices -- the utilisation of which clearly amounts to a use of force -- is a policy decision for the Policing Board, rather than an operational decision for the Chief Constable.  We hope that the Board will soon decide to end their use until and unless key human rights tests can be met.