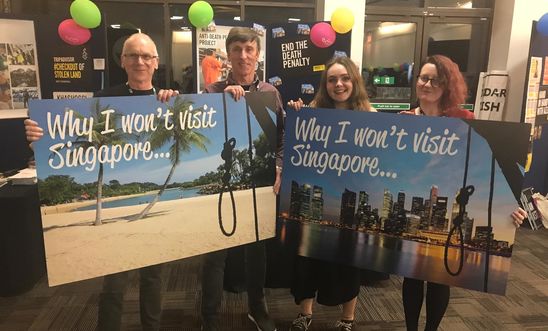 ADPP team members Paul, Phil, Rona and Rhiannon at the ADPP stall with our giant postcards. And a shout out to Surrayia who took the picture.

If you have not been to an Amnesty International AGM before you really should make the time to go, for reasons that I hope will become clear in this short report.

We pitched up on the morning of Saturday April 13th for two days of meeting, promoting the cause and finding out what else is going on.  The main purpose for the Anti-Death Penalty Project team was to spread the word about what we are doing among Amnesty activists both through our stall at the event and in the ADPP workshop.

Our stall and the Singapore tourist campaign

It was at the AGM that we launched our Singapore tourist campaign.  Singapore is a wealthy tourist and business destination, but it retains the death penalty.  Many of those sentenced to death are foreigners convicted of drug related offences.  We want to send a message to Singapore that the death penalty is unacceptable in the modern world and that as tourists we can choose not to visit until they abolish this most barbaric practice.

Therefore we are asking Amnesty members and other travelers to sign our postcards explaining why we do not intend to visit Singapore.  We are also asking people to tweet our #travel4life message from their abolitionist  holiday destination  We will also be taking our message to the Singaporean embassy on 9th August (so join us there!)

So on our stall at the AGM we distributed hundreds of Singapore postcards and photographed members with our outsized postcards.  We also handed out badges, tee shirts, placards and Amnesty’s 2018 death penalty report which has just been released.

In the ADPP workshop we talked about what had achieved during our first year and what we are planning during the coming year, including the Singapore campaign.  We also informed members about the very concerning developments in Egypt where hundreds of opponents of the Al-Sisi regime are being convicted and sentenced to death.  We asked the workshop participants to consider the arguments for and against the death penalty and finally we asked participants for their ideas for future campaign events, and they really came up trumps, giving us lots to get our teeth into at our next project meeting.

In the main auditorium there were many presentations and talks and we were delighted when our Japanese Embassy event from last year was specifically highlighted in the focus on activism.  There were many other fantastic events on the agenda as well including inspiring addresses by Kate Allen and Kumi Naidoo, moving testimony from the Stansted 15 activists that blocked an immigrant deportation flight and a rousing appearance by Amnesty children’s network activists and their campaign for climate justice.

Why you should go

On Sunday afternoon we left the AGM, delighted with what we had achieved, but even more inspired by the ideas and achievements of so many other Amnesty activists.  And that is why you should go if you possibly can.  It is the very best antidote to the cynicism and problems of today.  It is like an intravenous injection of inspiration and enthusiasm.

If you want to know more about our work including our Singapore tourist campaign, if you want to get more closely involved or if you would like one of us to come and talk to your local group one evening then please get in touch at deathpenalty@amnesty.org.uk.  We look forward to hearing from you.