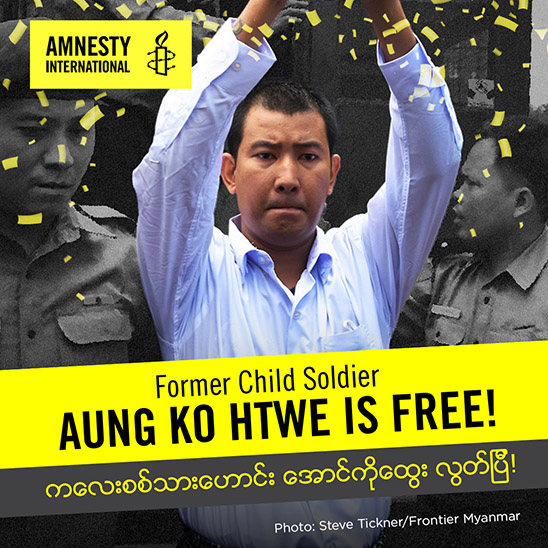 We're delighted that Aung Ko Htwe walked free on 6 September 2019 after completing the two years of his sentence. Thank you to the over 30,000 of you who took action and emailed the Myanmar authorities. We know building international pressure on cases like these makes a real impact.

In October 2005 Aung Ko Htwe was kidnapped by the Myanmar military at the main railway station in Yangon – the country’s largest city – and forced to serve in the army. He was only 13 years old at the time.

In 2017 he spoke out about what he experienced in a radio interview with Radio Free Asia, shortly after which he was arrested and charged under Section 505(b) of Myanmar’s Penal code – a vague law which severely restricts freedom of expression.

He was sentenced to the maximum two years in jail.

Section 505(b) can be used to prosecute anyone who makes, publishes or circulates information which may cause “fear or alarm to the public or to any section of the public whereby any person may be induced to commit an offence against the State or against the public tranquillity".

The law is so vague that it has frequently been used by the Myanmar authorities to wildly restrict freedom of expression.

As well as his sentence under Section 505(b), Aung Ko Htwe was given an extra six months for criticising the judge in his case. He decided not to appeal, saying he had no faith that a fair decision would be made. 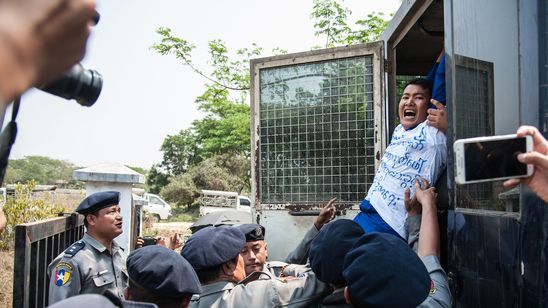 Myanmar has a long history of recruiting child soldiers into its armed forces.

The country signed a Joint Action Plan with the UN in 2012 to end the recruitment and use of child soldiers. Hundreds of children have been released from the military since and recruitment appears to have dropped.

However, we continue to hear reports of child soldier recruitment in some parts of the country.

It is clear from Aung Ko Htwe’s case that the Myanmar authorities want to keep this issue quiet.

A number of Myanmar laws, including Section 505(b), restrict the right to freedom of expression. They have been used to jail people just for speaking out against the government.

Activists and human rights defenders are at risk of arbitrary arrest and imprisonment as long as these laws remain in place.

We continue to call for these unfair laws to be abolished.