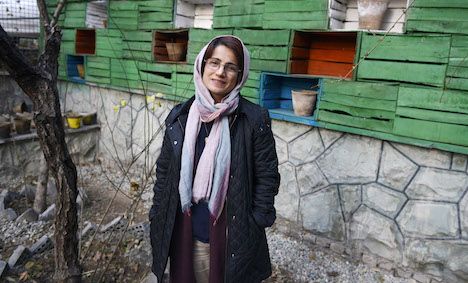 Nasrin is facing 38 years in prison and 148 lashes for her peaceful human rights work. She is a human rights lawyer who has dedicated her life to defending women’s rights.

She protested against Iran’s discriminatory and degrading forced veiling laws. No one should spend a single day in prison for saying that women should be allowed to wear what they want.

We are calling on Iranian authorities to immediately and unconditionally release Nasrin and overturn one of the harshest sentences we have seen in Iran against a human rights defender in recent years.

Nasrin was given the harshest sentence possible after two grossly unfair trials, and was separated from her husband and two children - just for saying women should be able to wear what the want.

Nasrin was briefly released from prison on temporary leave due to her ill health, having contracted COVID-19. However after only a few weeks with her family she was cruelly returned to prison on 2 December 2020, against the recommendation of health professionals who said she remained infectious with the disease.

With confirmed cases of COVID-19 in prisons across Iran, Nasrin’s life could be at risk. Prisoners are at particular risk because they are unable to adhere to the same social distancing and hygiene measures as those outside of prison to protect themselves.

It is essential that the Iranian authorities unconditionally release Nasrin on a permanent basis.

Unfair treatment of women in Iran

Women and girls in Iran are not allowed to leave their homes unless they cover their hair with a headscarf and cover up their arms and legs with loose clothing.

A movement against the compulsory hijab erupted in Iran in 2017 when one woman staged a solo act of resistance. She removed her headscarf and silently waved it on the end of a stick.

Countless women across the country joined her, staging their own protests. They become known as the “Girls of Revolution Street.”

Nasrin defended some of these women and is now paying the price.

Nasrin has been targeted before. In 2010 she was sentenced to six years in prison for her human rights work. But when thousands of people like you stood up to demand her freedom, she was pardoned and released. Our campaign worked then, it can work again for Nasrin now.

Nasrin is not a criminal. She is a human rights defender.

Sign our petition to call for her unconditional release from prison in Iran.