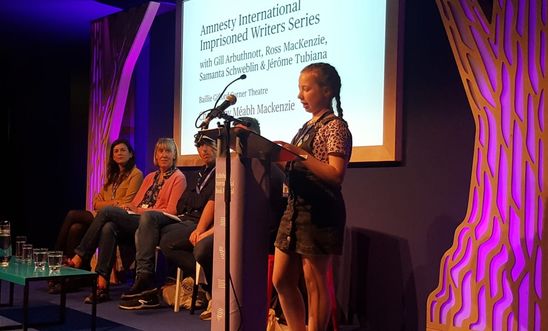 The Kids are Alright

196 countries have ratified it, including the United Kingdom. The USA is the only country which has not yet ratified the Convention.

The fact that a country has ratified the UNCRC does not guarantee that the rights within it shall be respected, protected and fulfilled. This can only be ensured when steps are taken to implement the Convention into domestic law, policy and practice.

The Scottish Government has pledged to incorporate the UNCRC into Scots Law.

The UNCRC guarantees children the right of freedom of expression, and states “this right shall include freedom to seek, receive and impart information and ideas of all kinds”.

Today’s readings reflect on this right to be heard and challenge us to listen to the next generation.

The letters from Aabla and Tatiana are from 21 remarkable Letters to UNICEF a UNICEF Global Teenager Project.

Adesew Oyinkansola wrote I Am a Child and Don’t Get Sidetracked by the Frivolous Things in Life when she was an 11-year-old student at Yaba College of Technology Secondary School, Yaba-Lagos. She started writing at the age of 6. Her first book of poetry titled Thoughts of a Child was published through a writing contest when she was 8 years old. You can read her poems at face2faceafrica.com

Pinar Aksu is a former child refugee who now lives in Scotland. While her family was seeking asylum in the UK, she was detained in Yarl’s Wood and Dungavel immigration removal centres. She now works as project coordinator and facilitator and is involved with several campaigning groups supporting asylum and refugee rights, promoting integration and opposing racism and detention.

The Fridays for Future movement was started by Greta Thunberg, a teenager from Sweden who in August 2018 decided to miss school every Friday and instead protest outside the Swedish parliament until it took more serious action to tackle climate change. Today’s reading is an extract from Greta’s powerful speech to MPs in the UK Parliament in April this year.

If you have been moved to take action by today's readings, you can join the #FridaysforFuture #ClimateStrike on 20 September 2019. Register at the Fridays for Future website.