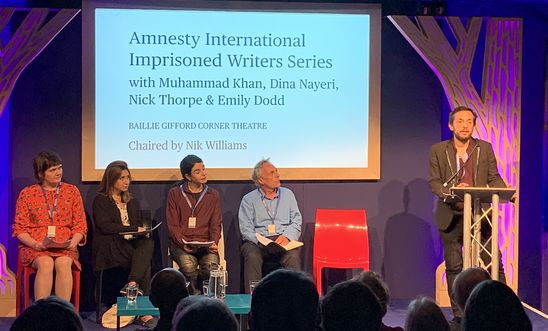 Imprisoned Writers: When the Situation is Desperate - Curated by Scottish PEN

‘The situation is desperate’. These are the last words the world saw written by Maltese investigative journalist, Daphne Caruana Galizia, published the morning a car bomb blew up the car that Daphne was travelling in, only minutes from her house. Every day around the world writers like Daphne face great personal risks of death, violent attacks, censorship or imprisonment for doing their job, for informing the public and for speaking out. Today’s readings include pieces of journalism and non-fiction chosen by Scottish PEN, from at-risk writers from Mexico, Malta, Northern Ireland and an Iranian/Kurdish writer detained as part of Australia’s immigration process.

PEN International is a not-for-profit organisation that champions freedom of speech and literature across borders.

PEN’s work is more important than ever. We live in a climate of self-censorship, fear, and uncertainty that restricts how we share ideas. Communications across borders are spied on and impeded. Writers around the world are censored, imprisoned, even sentenced to death. Those who escape into exile live in perpetual displacement and struggle to find a voice.

Scottish PEN defends these writers and their freedom of expression, freedom of press, and, most importantly, freedom to critique.

Behrouz Boochani, a Kurdish Iranian journalist and filmmaker, is currently stranded on Manus Island, Papua New Guinea. The Office of the United Nations High Commissioner for Refugees has characterised the situation there as “an unfolding humanitarian emergency.” He has spent nearly five years of his imprisonment typing passages of his book No Friend But The Mountains one text at a time from a secret mobile phone in prison. They form an incredible story of how escaping political persecution in Iran, he ended up trapped as a stateless person.

On 16 October 2017, journalist Daphne Caruana Galizia was murdered in a car bomb attack close to her home, attracting widespread local and international reactions. In December 2017, three men were arrested in connection with her murder. None of the three suspects have been brought to trial, and Malta's prime minister continues to block a public inquiry into the circumstances of Daphne Caruana Galizia's assassination.

Two hit men, presumed to have been hired by the drug lords, killed Mexican journalist Javier Valdez Cárdenas in 2017. He was dragged from his car in broad daylight as he left Ríodoce’s offices, riddled with twelve bullets, and left dying in the street as the hitmen escaped in his car along with his laptop, mobile phone and files.

Lyra McKee was a journalist from Northern Ireland who wrote for several publications about the consequences of the Troubles. In 2016, Forbes magazine named her as one of its 30 under 30 in media because of her work as an investigative reporter. She was killed earlier this year by a stray bullet fired during a riot in Derry. Her book Angels with Blue Faces was published posthumously earlier this month. Today we will be hearing her inspiring 'Letter to my 14 year old self'.