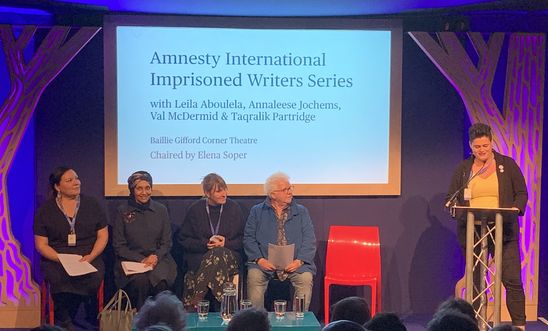 One of the themes of this years Book Festival is Indigenous Voices – reflecting that the UN General Assembly declared 2019 the International Year of Indigenous Languages – and a topic Amnesty International was proud to include in the Imprisoned Writers series.

It goes on to say that they

“have the collective right to live in freedom, peace and security as distinct peoples and shall not be subjected to any act of genocide or any other act of violence”

“the right to revitalize, use, develop and transmit to future generations their languages, oral traditions, writing systems and literatures.”

Today’s readings reflect on the difficulties indigenous peoples can face in seeking to claim these rights.

Former Reuters correspondent in Rwanda and the eastern Democratic Republic of Congo, Jean Baptiste Kayigamba lost most of his family in the Rwandan genocide of 1994. Over the course of three months, Hutu militias murdered an estimated 80% of the Tutsi population. Haunted by memories of the massacre, he sought asylum in the UK in 2001. Today’s reading was published in the New Internationalist in 2011.

2018 Nobel Peace Prize nominee Ilham Tohti was the winner of the 2014 PEN/Barbara Goldsmith Freedom to Write Award. A Uyghur economist, writer, and professor, his work promoted ethnic harmony and understanding. In February 2013, Ilham Tohti had been due to travel to America with his daughter Jewher Ilham at the invitation of Indiana University. He was prevented from travelling but urged his daughter to go on without him. She has not seen her father since that day at Beijing Airport. Today we will hear an extract from Jewher Ilham: A Uyghur's Fight to Free Her Father.

At the annual national Race Unity Speech awards in Auckland this year, six of New Zealand’s best high school speakers addressed how we can improve race relations. Year 13 Mount Albert Grammar School student Takunda Muzondiwa spoke about struggling to stay connected to her home in Zimbabwe, while trying to create a new home in Aotearoa. The speech has been viewed over half a million times on youtube.

Mehmed Uzun was a contemporary Kurdish writer and novelist. Although Kurdish was outlawed in Turkey from 1920 to 1990, he started to write in his mother tongue. As a writer, he achieved a great deal towards shaping a modern Kurdish literary language and reviving the Kurdish tradition of storytelling. He lived in exile in Sweden as a political refugee from 1977 until 2005. He then returned to Diyarbakir in Turkey where he died of cancer aged 54. Today’s piece was first published in the International Journal of Kurdish Studies in January 2003.

If you are inspired to find out more about the rights of indigenous peoples, as well as attending events in the Book Festival Indigenous Voices strand, you may be interested in a new multimedia storypage 'Flashpoints in the Amazon' published by Amnesty International to update our ongoing work on the risk of bloodshed in the Indigenous territories of the Brazilian Amazon.

This follows on from our initial crisis investigation in May into violent threats in the region. The update covers a significant escalation in the situation in July that saw fresh deforestation in Indigenous territories, including exclusive new satellite imagery analysis from Amnesty. It also documents the murder of an Indigenous leader allegedly by invading miners, the burning of bridges along the Trans-Amazonian highway and an arson attack on a petrol truck by illegal loggers, which prompted the deployment of troops and military police.

If Jewher Ilham's story moved you, you can take action for Uyghur woman Buzainafu Abudourexiti who continues to be held in incommunicado detention after she was suddenly detained in March 2017 and sentenced in a secret trial to seven years in prison. There is still no information about the charges against her, but it is believed that it may be part of a wider crackdown on Uyghur students who studied abroad. Buzainafu Abudourexiti returned to China in 2015 after studying in Egypt for two years. She is at grave risk of torture and other ill-treatment.