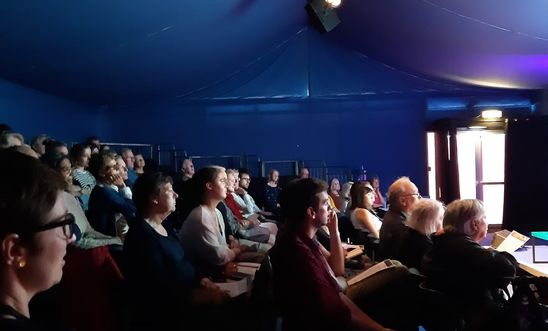 Today’s event has been curated by our friends at Freedom from Torture.

Freedom from Torture is the only UK-based human rights organisation dedicated to the treatment and rehabilitation of torture survivors. It was set up by Helen Bamber of Amnesty International to offer direct services to survivors of torture.

The selection today reflects on the chasm of memories that sleep can open for victims of torture and other human rights abuses.

Jade Amoli-Jackson left her home country of Uganda, where she studied journalism and worked as a sports reporter, when her life was in danger. She arrived in the UK in 2001 and was referred to Freedom from Torture, going on to join Write for Life. She volunteers at the Refugee Council and Moving Country, her first work, was published in 2013.

Joy Mukendi is from the Democratic Republic of Congo and has been a service user at Freedom from Torture since 2013, and a member of the Write to Life Group since 2015. She regularly writes poems and prose, as well as being an enthusiastic singer and member of the FFT choir. She lives in London with her three children.

Haydeh was born in Iran and studied Sociology at the University of Tehran.She emigrated to Britain following her five-year imprisonment in Iran’s Evin Prison for her involvement in the 1979 Revolution. In Britain she pursued her postgraduate studies and in 2010 established the Association for the Defence of Political Prisoners in Iran. She writes about her daily life, as well as the prison experience.

Tracey grew up with her parents on a flower farm in Harare, Zimbabwe. She escaped from the country following her release from prison at the verge of death, embarking on a long flight that took her through Malawi, South Africa, Ireland and Holland before finally being granted asylum in the UK. She was reunited with her daughter after 5 years.