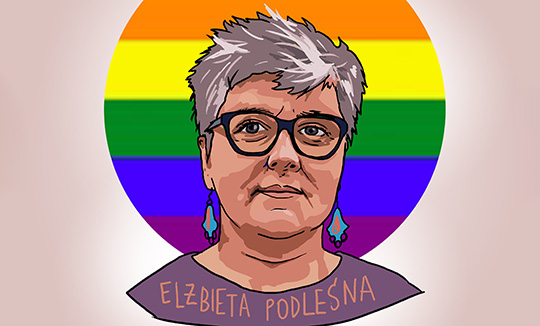 On 6 May at around 6am the police raided the home of prominent human rights defender Elżbieta Podleśna, arrested her and kept her in detention for several hours.

The police claimed to have found in her home copies of posters depicting the Virgin Mary with a halo around head and shoulders in the colours of the LGBTI flag and she is being investigated for “offending religious beliefs”, a criminal offence that carries up to two years’ imprisonment. Elżbieta Podleśna is being targeted for her human rights activism and this absurd investigation must be stopped.

I am writing to express my concern over the ongoing investigation against human rights defender Elżbieta Podleśna for “offending religious beliefs” after the police raided her home at 6am on 6 May and allegedly found copies of posters depicting the Virgin Mary with a halo around head and shoulders in the colours of the LGBTI flag.

Following the raid Elżbieta Podleśna was arrested and taken into detention for several hours. The police also confiscated her electronic equipment, including her laptop, phone and memory cards.

Having, creating or distributing posters such as these, should not be a criminal offense and is protected under the right to freedom of expression.

Elżbieta Podleśna is already facing numerous legal proceedings stemming solely from her peaceful activism. The way she is targeted with absurd charges in this case is consistent with this pattern of harassment.

I therefore urge you to ensure that the investigation against Elżbieta Podleśna for “offending religious beliefs” is halted immediately, that the police return all of Elżbieta Podleśna’s belonging and that she can carry out her peaceful actions free from harassment and reprisals.