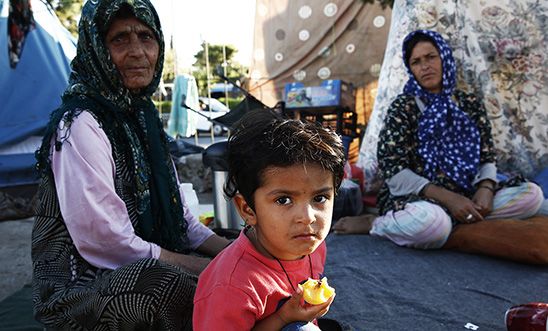 This Afghan family have been living in the old airport of Elliniko, Athens for five months. Golroz (right) is six month pregnant © Giorgos Moutafis/Amnesty International

Refugees are people who have had to flee their country because of war or persecution. They cannot return to their own country because their own government cannot or will not protect them, they are forced to leave their homes and seek international protection.

Just over 21 million people – or 0.3% of the world’s population – are refugees right now.  But instead of showing true leadership and protecting refugees, most countries are slamming their doors shut.

Powerful media and politicians are manipulating reality and dehumanising them, portraying refugees as illegal, faceless invaders who threaten our security. They’re ducking their responsibility to protect people fleeing persecution or brutality. And every single day that goes by, their indecision and inaction are causing immense human suffering.

‘If I were to wish for something, it would be a job, independence, and to be with our loved ones. A normal life in safety – it’s as simple as that.’

Around the world, new conflicts and crises are forcing more people to leave their countries. Yet the world’s wealthiest nations are leaving a handful of countries to cope alone with nearly all the world’s refugees. Meanwhile old ones are no closer to resolution.

Almost 5 million people have fled Syria in the last five years. Most of them live in just three countries: Turkey, Lebanon and Jordan. The UK has accepted approximately 8,000 Syrians since 2011, while Jordan – with a population almost 10 times smaller than the UK and 1.2% of its GDP – hosts over 656,000 Syrian refugees and more than 2 million Palestinian refugees.

And while the plight of Syria refugees has received much media attention, refugees from other regions including 5.3 million Palestinians, 2,7 million Afghans and 1.1 million Somalis, are also being neglected, in some cases for decades.

This year, South Sudan - the world's newest country - has joined this appalling list with over one million of its citizens forced to flee because of conflict in that country.

The UK government must do more

The UK’s refusal to share responsibility for hosting refugees and to provide safe and legal routes to safety is setting a terrible example that other countries are increasingly following.

The result is that more and more people fleeing violence and persecution are forced into the hands of smugglers and into taking increasingly dangerous journeys to safety.

‘The new Home Secretary must reassess the disastrous impact the UK’s refusal to share responsibility for refugees is having both domestically and internationally. The whole system needs a compassion overhaul. It’s disgraceful that the UK hosts less than one percent of the world’s refugees when our size and prosperity mean we should do so much more.

‘Desperate families are forced into the hands of traffickers precisely because countries like ours have pulled up the drawbridge. Smaller, poorer neighbouring countries are left to try and cope, and when they can’t more people are forced to try to move on, seeking a basic level of safety.’

It is not simply a matter of sending aid money

Rich countries cannot just pay to keep people ‘over there’. The result is that people who have fled war are now enduring dehumanizing living conditions and dying of entirely treatable diseases. They escaped bombs to die of infections, diarrhoea or pneumonia. Children are not attending school, with devastating consequences for the rest of their lives.

The conditions and treatment people face in these host countries is driving people to move on, often turning to smugglers and dangerous journeys.

If most countries were to take their fair share of refugees, then no one country would be overwhelmed and the lives of refugees would be significantly improved – they would have the opportunity to rebuild their lives. This is how we can fix it

Keeping refugees out is not a solution. People will continue to try and leave countries where they cannot rebuild their lives and try to get to places where they can. And if they have no option they will use people smugglers and dangerous route.

All countries can help protect refugees through a solution called resettlement, and other safe and legal routes. Resettlement can protect those refugees who are most vulnerable – people who have been tortured, for example, or women at continued risk of abuse. Safe and legal routes are other 'pathways' to safety that governments can open up in emergency situations, such as the Syrian refugee crisis.

However, resettlement alone will not alleviate the plight of refugees living in completely unsustainable situations, in countries that have large refugee populations. Countries need to open up more safe and legal routes for refugees so they can seek asylum without having to cross dangerous seas in overcrowded boats or walk hundreds of miles carrying their children and all their belongings. Instead of handing over their life savings to smugglers, they could spend their money on starting a new life.

By agreeing to share responsibility for protecting refugees, governments can show true leadership, invest in people’s lives and futures and bring out the very best in us all.

Our response to the global refugee crisis will define what kind of world we and future generations will live in. History will judge us by how we tackled the worst humanitarian crisis of our time.

This is our moment to defend the things that unite us as human beings, and refuse to let fear and prejudice win.