Maura, a transgender woman, has spent half her life living in the United States of America. Years ago, she sought safety in the US after experiencing relentless transphobic violence in Mexico after she left Nicaragua at a young age. Authorities in the USA have been holding her for over two years at an immigration detention facility in California, where she has experienced abuse and a lack of adequate medical care. We demand authorities free Maura immediately. 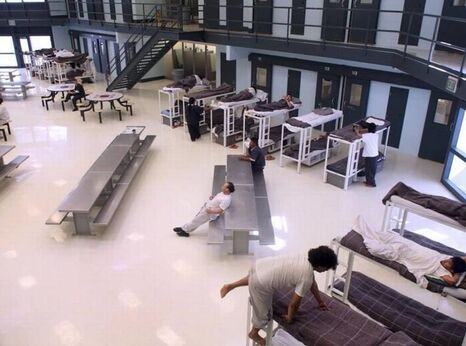 Maura, a transgender woman, has spent half her life living in the United States of America. Years ago, she sought safety in the US after experiencing relentless transphobic violence in Mexico after she left Nicaragua at a young age. Authorities in the USA have been holding her for over two years at an immigration detention facility in California, where she has experienced abuse and a lack of adequate medical care. We demand authorities free Maura immediately.

Despite taking welcome steps to roll back some discriminatory and xenophobic policies of the past, President Joseph Biden and his administration in the USA have yet to follow through on a number of immigration reforms pledged and must immediately change course on immigration detention. Shortly after he took office, ICE had detained 13,860 people in early February. As of June 2, this number has skyrocketed over 66 percent to 23,107. Furthermore, thousands of others are being summarily expelled without being given the opportunity to request protection.  Black and brown immigrants and asylum seekers make up the overwhelming majority of those detained, and they have long faced added discrimination and human rights abuses at the hands of ICE.

Amnesty International is calling on the Biden administration and its relevant agencies to release people in immigration detention through an affirmative file review process with a presumption of liberty, phase out ICE contracts with private prison companies and county jails, and end family detention. Instead of immigration detention, the presumption should be liberty, with asylum-seekers and immigrants allowed to live in the community, supported by sponsors, community-based services, and case management programs.

Detention of asylum seekers should only be a measure of last resort, after other non-custodial alternatives have proven or been deemed insufficient in relation to the individual. According to the UN Special Rapporteur on torture and other cruel, inhuman or degrading treatment or punishment, the detention of asylum-seekers solely on the base of their immigration status can “very quickly, if not immediately” constitute ill-treatment against individuals in situations of increased vulnerability, specifically including women, older people, persons with medical conditions, or social minorities including LGBTI persons.

Under international law, the USA government has an obligation to ensure that the human rights of migrants and asylum seekers are respected, protected, and fulfilled. In its July 2017 report on a country visit to the US, the UN Working Group on Arbitrary Detention said that: "the mandatory detention of immigrants, especially asylum seekers, is contrary to international human rights and refugee rights standards.[...] The Working Group has observed that the current system of detaining immigrants and asylum seekers is, in many cases, punitive, unreasonably long, unnecessary, costly when there are alternative community-based solutions, […] not based on an individualized assessment of the necessity and proportionality of detention, carried out in degrading conditions, and a deterrent to legitimate asylum claims."

The United States of America government is under an obligation not to return individuals to a situation in which they would be at risk of torture or other serious human rights abuses: the principle of non-refoulement. Such safeguards are imperative for protecting refugees fleeing violence and persecution. Persecution of LGBTI people in Nicaragua has been consistently observed and documented by Amnesty International and virtually every other organization that closely reports on the conditions of the country, including the USA Department of State.

For at least the past 10 years, the US Department of State’s Nicaragua County Reports have highlighted the widespread “attacks against lesbian, gay, bisexual, transgender, and intersex (LGBTI) persons” Among the findings of the Inter-American Commission on Human Rights (IACHR) report was that persecution of the LGBTI people in Nicaragua led to their forced migration; LGBTI organizations in Nicaragua experience a number of attacks; and  LGBTI people from the Atlantic Coast were subject to “debasement, humiliation, and instances of stoning.”  Nicaragua has a history of systemic persecution of the LGBTI community and this has accelerated since the Spring 2018 protests. Maura’s status as a transgender woman puts her at risk of violence and persecution at the hands of Nicaraguan authorities if she is returned to Nicaragua.