Kameel Juma Hasan, a Bahraini secondary school student, has been imprisoned in reprisal against him and his family after he and his mother refused to become informants and his mother spoke out in the international press. He faces over 20 prosecutions arising from his alleged participation in opposition demonstrations. 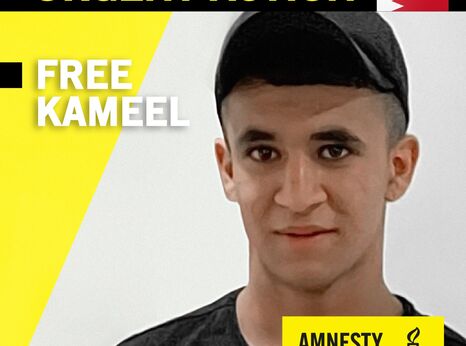 Kameel Juma Hasan, a Bahraini secondary school student, has been imprisoned in reprisal against him and his family after he and his mother refused to become informants and his mother spoke out in the international press. He faces over 20 prosecutions arising from his alleged participation in opposition demonstrations.

Kameel Juma Hasan is the son of Najah Ahmed Yusuf, a former prisoner convicted and held for over two years on charges of posting content opposing the government online. On 23 April 2017, Kameel, 14 years old at the time and still in middle school, was summoned with his mother for interrogation on charges of “unlawful assembly”, “hooliganism”, and “production and possession of flammable or explosive articles” (presumably meaning Molotov cocktails). While he was being held in the interrogation centre that day, a court convicted him in a grossly unfair trial in his and his lawyer’s absence of these charges and sentenced him to probation for a year. The family were never informed that he had proceedings on that date, and only learned of the ruling later.

As Najah has described in interviews, during the interrogations with her and her son, Kameel, in April 2017 at the Muharraq office of the Criminal Investigations Directorate (Bahrain’s police interrogation agency), intelligence officers demanded that both mother and son become informants for the government on opposition activities in the Murqoban area of Sitra where the family lived. The officers threatened to take revenge against Kameel, using the criminal charges raised against him as a means of coercion, and told Najah they would kill members of her family, making it appear as an accident, if the two did not accept work as informants. Najah has consistently reported from the time of her arrest that she was subjected to beating and sexual assault by her interrogators. After she refused to become an informant during several days of interrogation and abuse, she was taken into pre-trial custody, prosecuted, and imprisoned based on charges of circulating online opposition content. She has spoken out about her experience to British media (The Independent, the BBC) since her release. Amnesty has written about her case several times.

Later in 2017, after his mother had been imprisoned, Kameel was summoned again under a new set of charges based on alleged participation in a violent demonstration. Given his prior experience of coercion under interrogation and conviction in an unfair trial, he did not respond to the summons. On 26 November 2017, a Bahraini court convicted Kameel in his absence on the new charges, ruling that he had violated the terms of his probation and ordering that he be held for the remainder of the probation term in a youth detention centre. He did not turn himself in to serve this term of detention and therefore became wanted. He managed to take his final exams for middle school in spring 2018, but thereafter went fully into hiding and so could not begin secondary school in the fall 2019 term starting September.

Throughout 2018 and 2019, a steady stream of summons, charges, and prosecutions were raised against Kameel, including six prosecutions based exclusively on charges of “unlawful assembly” and “hooliganism”, and over a dozen more also linked to participation in demonstrations. In total, Bahrain has raised at least 22 separate prosecutions against Kameel arising from his alleged participation in demonstrations. In one prosecution he has 38 co-defendants, including 13 other children – an unreasonably high number of defendants to charge in a single case that makes the task of determining individual criminal responsibility unfeasible and thus violates the right to fair trial. It appears that all of Kameel’s co-defendants, like him and his family, are Shi’a. Kameel’s home area, the island of Sitra, is almost exclusively Shi’a, and citizens from Sitra have often been viewed with suspicion by Bahrain’s Sunni government. Prison authorities recently confiscated religious articles (spare copies of the Qur’an and rosaries) from Kameel and other Shi’a inmates.

By the end of 2019, cases were being added against Kameel so rapidly that he was sometimes expected to attend separate hearings in separate prosecutions in a single day. Faced with mounting threats to the rest of the family as his father, brother, and cousins were summoned for interrogations on his whereabouts, Kameel ultimately chose to turn himself in after yet another summon, this one to the Nabih Saleh police station for the date of 31 December 2019. After turning himself in, he was transferred later the same day to the Royal Academy of Police, where Amnesty’s sources report he was subjected to beating and stress positions (forced standing). Several days later, he was taken to sign prepared “confession” documents that he had no opportunity to read. Given the proliferation of identical cases against him, the background, and the timing – official pursuit of Kameel became more aggressive as Najah continued to speak out about her own ordeal – it appears that his prosecution and imprisonment have been taken in reprisal against his mother.

Kameel was 16 years old at the time of his detention, and thus legally a minor under Article 1 of the Convention on the Rights of the Child, to which Bahrain is a party. Bahrain, however, has treated individuals above the age of 15 as adults for purposes of criminal prosecution since 1976, a stance it reaffirmed in its amendment of the Law on Minors in 2014 (Decree of Act No. 17 of 1976 on Minors, Art. 1, and Act No. 15 of 2014 amending this provision). Children under 15 can also be placed in various disciplinary proceedings falling short of criminal prosecution for participating in demonstrations under Bahrain law (Law on Minors, as amended by Decree of Act No. 23 of 2013, Arts. 2.8 and 6).