Tunisia: Activist acquitted of all charges 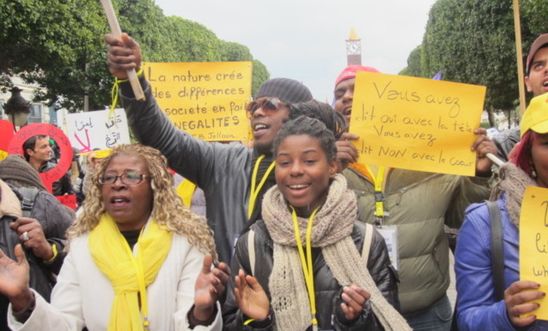 On 19 September 2019, an 18-year-old activist facing up to four years imprisonment for trumped-up charged, was acquitted of all charges by a court in Tunis.

Maissa al-Oueslati’s case received the support of several human rights organisations in Tunisia and abroad. During her hearing, a team of five human rights lawyers made the case for the arbitrary nature of her detention and the several procedural breaches made throughout the process, including interrogating her without the presence of a lawyer.

Following the successful result, Maissa spoke to Amnesty International: “all my respect and love for standing by me”. “I never imagined I would get this much support”

She was overwhelmed by the amount of support she received from activists, many of whom were Amnesty International members who showed up at the court the day of the hearing, holding signs displaying messages of support outside of the courthouse.

Maissa never imagined she would be arrested, but this incident has made her determined to continue to carry out her activism for positive change in Tunisia.

Maissa’s case has served as a strong reminder that polices forces in Tunisia continue to operate without punishment for any unjust behaviours. To date, no investigation has been opened to hold the police officers suspected to be responsible for the abuses to account.

Arrested for filming a protester

Her younger brother rushed towards her and begged the officer to let her go. The police officer pushed the teenage boy on the ground and proceeded to handcuff Maissa and her brother.

At the police station officers interrogated the two siblings without the presence of a lawyer or a parent, as required by Tunisian law for minors, as well as international human rights law. Later that night, Maissa and her brother were transferred to Bouchoucha detention centre in another part of Tunis, where they spent the night.

Maissa’s brother, who is facing similar charges of “insulting a public official” and “refusing to comply to orders”, appeared in court on 30 October 2019 for a separate hearing. We have not yet received updates regarding the outcome of his hearing.