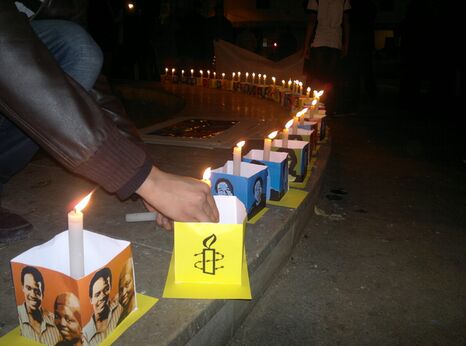 Sultana Khaya is the president of an organization called the ‘League for the Defense of Human Rights and against Plunder of Natural Resources’ and is known for her vocal activism in defence of the right of self-determination for the Sahrawi people.

In a call with Amnesty International on 8 March, Sultana Khaya lamented spending international women’s day- on 8 March- “suffering under siege”. Since 19 November 2020, Sultana Khaya and her family’s movements are restricted to the confines of their own house. Videos, reviewed by Amnesty International and filmed by Sultana Khaya and her sister Waraa Khaya on various days since 19 November 2020, show security forces in uniforms and civilian clothes standing in front of the house, and at times police vans parked outside. Sultana Khaya has not been allowed to walk further than to the corner of her house before being forcefully carried back to the house by police officers by her hands and legs. A video filmed on 17 February, shows police officers in plainclothes dragging Waraa Khaya and forcing her inside the house, repeatedly slamming the door shut and banging on it.

Under international human rights law, house arrest is considered as a form of detention and requires certain safeguards to be considered lawful. According to the UN Human Rights Committee’s General Comment 35 on Article 9 of the International Covenant on Civil and Political Rights liberty-depriving measures, including house arrest, must not be arbitrary and must be carried out with respect for the rule of law and allow a meaningful and prompt judicial review of detention. Deprivation of liberty, including in the form of house arrest, is arbitrary when it results from the exercise of human rights, including the rights to freedom of expression, association and peaceful assembly.

Western Sahara is the subject of a territorial dispute between Morocco, which annexed the territory in 1975 and claims sovereignty over it, and the Polisario Front, which calls for an independent state in the territory and has set up a self-proclaimed government-in-exile in the refugee camps in Tindouf, southwestern of Algeria. A UN settlement in 1991, which ended fighting between Morocco and the Polisario Front, called for a referendum to be put to the people of Western Sahara to exercise their right to self-determination by choosing independence or integration into Morocco. The referendum has not been held amid ongoing disputes about the process of identifying who may vote in the referendum.

In recent years, access to Western Sahara has grown increasingly difficult for external monitors as the human rights situation has continued to deteriorate. In 2020, Moroccan authorities prevented at least nine lawyers, activists and politicians from access to Western Sahara. Journalists have also been denied access which makes the struggle of human rights activists widely uncovered. The UN Security Council has been ignoring calls by Amnesty International and others to add a human rights component to the United Nations Mission for the Referendum in Western Sahara (MINURSO), which would allow for monitoring and reporting on human rights abuses, as is done by the vast majority of comparable UN missions around the world.