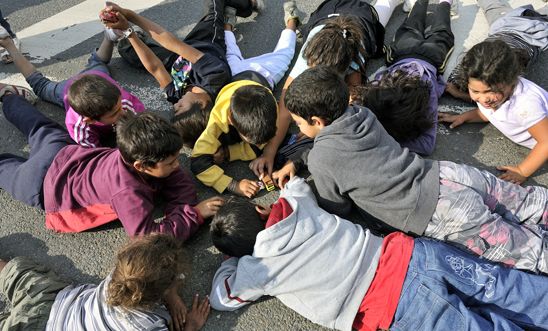 Located between a decommissioned railway and a small stream, Craica is a Romani settlement in Baia Mare, North-West Romania.

Until last year, it was the place W called home. Now, she lives with her partner and two children in one room of a decommissioned chemical factory’s former office building, on the outskirts of the city.

Leaving was not their choice. W was forced to sign her home over to authorities intent on demolishing the Romani settlement. And she is not alone. Across europe Roma face prejudice, hatred and violence. They are forced to leave their homes, given sub-standard education and are segregated from society.

Roma people might make up one of Europe’s largest minorities. But they are also one of the most deprived and discriminated against.

This treatment is not just wrong, it is illegal. We are calling on the Europena Union (EU) to hold governments to account and end discrimination against the Roma.

Between 10 and 12 million Roma live in Europe. Approximately half of them – around 6million - live in EU member states. Over a decade ago the EU adopted a law that prohibits discrimination on grounds of race and ethnicity.

But the very governments that should be protecting Roma rights are often behind policies that reinforce the worse prejudice.

Over the course of our research we have discovered trends in discrimination across Europe. The key areas are:

Despite EU laws against discrimination, education in the Czech Republic, Greece and Slovakia is segregated. Roma children are made to study in Roma-only schools or classes. Some are sent to institutions for students with ‘mild-mental disability

This substandard education means that across Europe, attainment levels of Roma are far below average - only one out of seven young adults has completed upper-secondary education.

Every year, across Europe, thousands of Roma are forced from their homes – left homeless or relocated to camps or informal settlements with no heating, water or sanitation.

Often unable to afford rents in the private housing markets, hundreds of thousands of Roma in Europe are denied other options, including social housing.

ore than 10,000 people were evicted from informal settlements in France during the first half of 2013.

In Bulgaria more than 70 per cent of urban Roma live in segregated neighbourhoods. And forced evictions in Romania are staggeringly high.

Roma people have been condemned to a life of constant insecurity, wandering from one makeshift camp to another.

State-level discrimination against Roma is made worse by violent racist attacks aimed at their communities. They are been shot at, stabbed and targeted with Molotov cocktails.

Available statistics show that between January 2008 – July 2012 there were over 120 serious violent against Roma people or their property in Hungary, the Czech Republic, Slovakia and Bulgaria. At least 22 Roma died as a result of these attacks, and many more were injured.

Despite this racially motivated violence, Roma are often left without police protection or access to justice.

None of these policies and practices is a coincidence. They are the result of widespread discrimination and racism facing Roma across Europe.

And this treatment is being allowed to continue despite the EU having an anti-discrimination law, which all of these states should be abiding by. Roma rights are protected by the European Social Charter which guarantees social and economic human rights, and the Race Equality Directive, which all member states are signed up to.

What we're doing about it

All the EU Commission needs to do to stop these racist practices and politicies is to properly enforce the law. But it continues to turn a blind eye to the treatment of Roma. And we are committed to making that stop.

Working alongside Roma activists, we are putting pressure on the EU to implement its law and take positive actions to fight discrimination against Roma in its member states. We want the Commission to initiate infringement proceedings against any of the 27 member states whose policies or practices are contrary to EU law, including the Race Equality Directive.

Anything else is to fail its responsibility and obligation to people like W, to the people of Europe.

Read the latest updates from our campaign or download our briefing on the issues below.

Downloads
Human Rights on the Margins: Roma in Europe