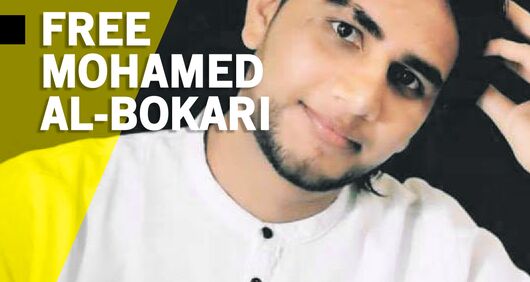 Yemeni LGBTI rights defender Mohamed al-Bokari who has been detained in Malaz Prison in Saudi Arabia’s capital Riyadh since 8 April 2020, attended his first trial session on 20 July. Al-Bokari was charged with violating public morality, promoting homosexuality online and imitating women. He was sentenced to 10 months in prison after which he is to be deported back to his home country, Yemen, where his life is at risk by armed groups. He has had no legal representation throughout his detention and trial.

After more than 9 weeks in detention without charge or trial at Malaz prison in the capital Riyadh, and following Amnesty’s UA on 2 July, Yemeni LGBTI rights defender Mohamed al-Bokari was presented to court in Riyadh on 20 July where he was charged with violating public morality, promoting homosexuality online and imitating women. He was sentenced during the same hearing to 10 months in prison and ordered to pay a fine of 10,000 Saudi Riyals. The court also ordered his deportation to his home country, Yemen, following the completion of his prison sentence. Mohamed’s return to Yemen after serving his sentence would put his life at risk due to death threats, he said he has received from armed groups.

On 30 July, Mohamed al-Bokari received a visit in prison from government officials who took his testimony about his arrest and ill-treatment. In early August, al-Bokari was moved to a better ventilated prison cell with air conditioning and was given assurances by prison authorities that he will be provided with the medical care he needs.