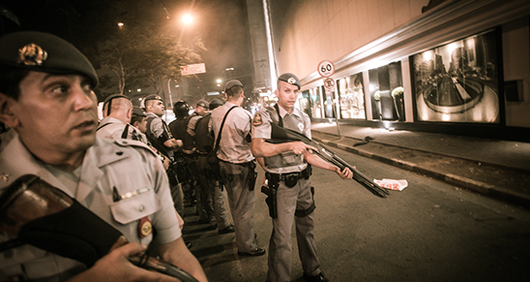 On 22 April, 27-year-old Edilson Silva dos Santos was shot in the head and died during a protest in the Pavão-Pavãozinho community in Copacabana. It has not been established who fired the shot.

Edilson Silva dos Santos and other residents from the community were unarmed in the protest. The military police officers policing the protest were armed with firearms. The protest was a spontaneous reaction by residents to the death of Douglas Rafael Pereira da Silva, aged 26, who was found dead in the backyard of a children’s daycare centre earlier that day.

Initial investigations indicate that he died around 1am on 22 April during a police operation in the community. Local residents alleged that he was killed by the police. Later in the day on 22 April, the military police from the local Pacification Police Unit (Unidade de Polícia Pacificadora, UPP) surrounded the daycare centre where Douglas Rafael Pereira da Silva’s body was found, and there are strong indications that the crime scene might have been changed.

The medical forensic assessment concluded that he died after being shot by a firearm which resulted in the perforation of his lung. Since Douglas’ death, his mother, Maria de Fátima, has made public calls for justice. She told us and others that on 28 April she was threatened by a man driving a car and carrying a firearm. She stated that he told her “if you don’t shut up, I will do that” (se você não calar a boca, eu vou calar).

We have received reports of the use of unnecessary and excessive force and other abuses by police officers from the UPP against residents of this area. For example, only a couple of days earlier, a 27-year-old man coming back from a family gathering was reportedly approached by two police officers from the UPP, who then shot twice at a wall next to his head and fired three more shots into the air as a form of intimidation.

Please write immediately in Portuguese, English or your own language:

For further information please download the urgent action circular below.

Please check with the individuals at risk programme before sending appeals after 11 June 2014: