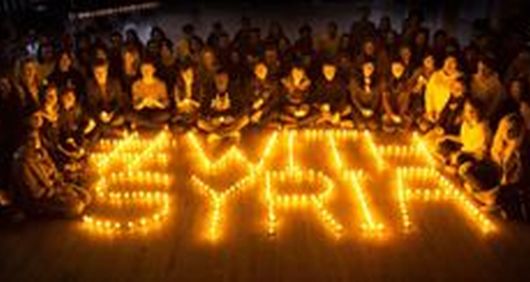 Satellite images show that since the conflict began, three quarters of the electric lights in Syria have gone out. Four years of crisis have literally plunged Syria’s people into the dark: destitute, fearful, and grieving for the friends they have lost, and the country they once knew. Meanwhile, the spectre of ISIS has fuelled fear and entrenched dangerous divisions within and beyond the region.

Public and policymaker confidence that an end to the violence and suffering can be found is low. Yet every day, ordinary Syrians, like those in the Syrian Non Violence Movement (SNVM) are committing extraordinary acts of courage and heroism.

By showing solidarity with these heroes we will inspire people around the world to act to Turn the Lights Back On. In a series of connected campaigns at specific moments, beginning on the fourth anniversary, online mobilisation, global coordinated offline actions, and high-impact media work will show governments that people care about the plight of Syrians, and demand action.

Our key calls to governments, including the UK, are:

1. Boost the humanitarian response - fully fund the aid response and ensure refugees seeking safety find asylum, including through increased resettlement for the most vulnerable;

Find out everything you need to know in the downloads below.