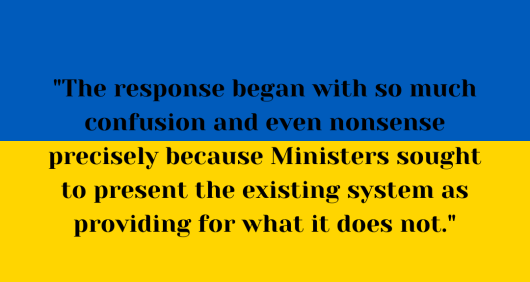 The UK response to refugees from Russia’s war of aggression in Ukraine has so far been slow, confusing and piecemeal.

It has now been formalised in the immigration rules – though that part of the response relating to extensions of visas for Ukraine nationals already in the UK is not to take effect until 3 May 2022.

There are two other parts. One a scheme for Ukrainians to find safety with family already living in the UK, the other for Ukrainians to be provided safety by members of the British public offering them accommodation here.

This comment piece is not about the detail of these schemes. Rather, it is about what these schemes and how they have come to be introduced reveal of the underlying attitude of the Home Secretary and her department towards their asylum responsibilities.

One flaw at the heart of all of this is treating the immigration system (which concerns the rules that govern who may come and stay in the UK for purposes such as work, study, joining family and visiting) as encompassing the distinct matter of providing asylum.

As discussed below, the immigration system is not designed to address asylum responsibilities. That system's emphasis on the need for people to obtain permission before travelling is in direct conflict with those responsibilities.

First, it is useful to recap what asylum responsibilities are.

The UK is signed up to the 1951 Refugee Convention. As such, it is one of over 140 countries committed to sharing responsibility for guaranteeing the right to seek and enjoy asylum from persecution by applying the terms of that Convention.

At the heart of the Convention is recognition that refugees - that is people fleeing persecution - are entitled to cross borders to seek asylum without obtaining permission to do so in advance (e.g. obtaining a visa to travel).

As UNHCR – the Convention’s guardians – have repeatedly emphasised over recent months, failing or refusing to share in this responsibility puts the whole international system for providing asylum at risk.

Putting that system under strain in this way cannot secure anything good.

If the system breaks down, it can only lead to more people moving further, more frequently and by more dangerous and exploited journeys in search of the safety they need (and to which they are entitled).

To request asylum in the UK a refugee must first reach the UK, but visas are not available for that purpose. Nonetheless, most refugees are of a nationality required under the UK’s immigration rules to have a visa to travel here.

The Government is currently passing legislation – the Nationality and Borders Bill – to make the impact of this inherent inconsistency even more harmful and oppressive to people forced to flee conflict and persecution.

The aim is to more forcefully shut the door on refugees while punishing and penalising the few who nonetheless continue to come.

Insistence on visas and existing bureaucracy

Ministers do not like to present themselves as simply impervious to the needs of people seeking safety from torture and terror.

Instead, they suggest that their immigration rules provide the safe and legal routes they acknowledge refugees need while decrying anyone who seeks asylum by any means not sanctioned by those rules. But their rules do not provide those routes.

Nonetheless, the response to Ukrainian refugees has been led by an insistence on visas and existing bureaucracy established under the immigration rules.

This is because anything else would expose a vital truth – the UK immigration rules are not designed and do not provide for people to seek asylum.

The response began with so much confusion and even nonsense – such as the suggestion that people fleeing the conflict could apply for seasonal work visas – precisely because Ministers sought to present the existing system as providing for what it does not.

It took much political and public pressure, and time, for Ministers to begin acknowledging that this system did not provide the means for Ukrainians to find safety here.

Even now, the schemes that have been established are ill-designed to address the urgency of Ukrainian refugees’ need for a place of safety – including refugees who have family long settled in this country or refugees who were already here before Russia began its invasion.

The insistence on visas is causing delay, bureaucracy and uncertainty.

If this is bad for Ukrainian refugees, how much worse for refugees from other countries?

Ukrainian refugees at least now have schemes that are formally open to them – however, begrudgingly introduced, inadequately designed and disabling in practice.

Other refugees do not even have this much.

There is, for example, no scheme for Syrian, Afghan or Sudanese refugees to be provided safety by their families in the UK.

It could and should be all so very different.

Government could show leadership, back public support for refugees and enhance the capacity of the UK to provide asylum.

It could do this by working with local authorities and community groups to construct means by which members of the public can support refugees – wherever they are from, however they may have come here and within whatever capacity someone has (which could but need not be by providing accommodation).

It could also do so by enabling family in the UK to provide for their loved ones when forced to flee war and repression.

Most importantly, it must end its current determination to punish the relatively few people who seek asylum in the UK. These people make dangerous journeys, on which they often suffer grave harms and exploitation, precisely because there are no alternatives for them to exercise their right to seek safety here.