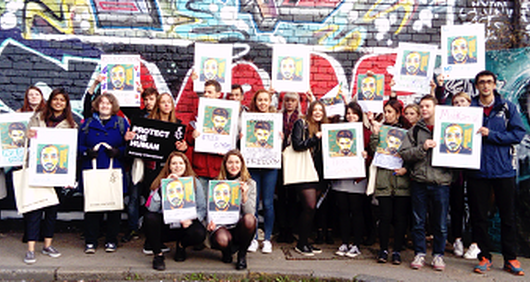 Anyone that came to the Student Conference last November will remember taking action on behalf of Bayram and Giyas, two student activists currently imprisoned in Azerbaijan for political graffiti.

Since the Conference, both Bayram and Giyas have now been sentenced to 10 years in prison after the authorities gained ‘confessions’, obtained under torture, of drug possession. These young activists are prisoners of conscience. The timing of their arrest, shortly after painting the graffiti, the nature of their interrogation and the torture they were subjected to, points to the conclusion that the drug-related charges against them were fabricated in order to punish them for their political activities.

Now, ahead Azerbaijan's Novruz (New Year) Festival celebrations at the end of March, we would like you once again to take action, by sending appeal letters to the Azerbaijani embassy urging the ambassador to call on the Azerbaijani authorities to release Bayram and Giyas. New Year is traditionally a time used to announce prisoner’s amnesties, so this is a key moment for impact on their cases.

Downloads
Template letter for groups to use