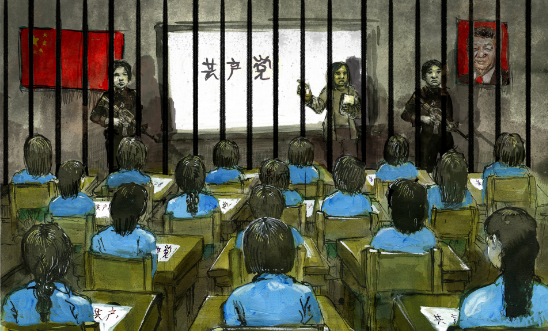 “I think the purpose...was to destroy our religion and to assimilate us…They said that you could not go to Friday prayers…You must not thank Allah; you must thank [President] Xi Jinping for everything,” a former camp detainee in Xinjiang

Since 2017, under the guise of a campaign against “terrorism”, the government of China has carried out massive and systematic abuses against Muslims living in the Xinjiang Uyghur Autonomous Region (Xinjiang).

The government’s campaign evinces a clear intent to target parts of Xinjiang’s population collectively on the basis of religion and ethnicity and to use severe violence and intimidation to root out Islamic religious beliefs and Turkic Muslim ethno-cultural practices.

The government aims to replace these beliefs and practices with secular state-sanctioned views and behaviours, and, ultimately, to forcibly assimilate members of these ethnic groups into a homogenous Chinese nation possessing a unified language, culture, and unwavering loyalty to the Chinese Communist Party (CCP).

Amnesty International's investigation into the crushing repression faced by Uyghurs, Kazakhs and other predominantly Muslim ethnic minorities in Xinjiang is the most comprehensive to date. 55 former detainees detail their experiences of life in the camps and the brutality they were subjected to.

Internment in the camps

Many were interned as a result of their relationships, or perceived or alleged relationships, with family, friends, or community members – many, if not most, of whom were themselves not guilty of any internationally recognized criminal offence.

From the moment they entered a camp, detainees’ lives were extraordinarily regimented. They were stripped of their personal autonomy, with every aspect of their lives being dictated to them. Detainees who deviated from the conduct prescribed by camp authorities – even in the most seemingly innocuous ways – were reprimanded and regularly physically punished, often along with their cellmates.

Teaching Chinese was a primary objective of the “education” that detainees received in the camps. In addition to language classes, most former detainees reported attending some combination of history, law, and ideology classes or, as many former detainees referred to it, “political education”. These classes focused largely on forcibly indoctrinating detainees about the “evils” of Islam and about how prosperous, powerful, and “benevolent” China, the CCP, and President Xi Jinping are.

Every former camp detainee Amnesty International interviewed was tortured or subjected to other cruel, inhuman, or degrading treatment or punishment.

Torture methods used during interrogations and as punishment included beatings, electric shocks, stress positions, the unlawful use of restraints (including being locked in a tiger chair), sleep deprivation, being hung from a wall, being subjected to extremely cold temperatures, and solitary confinement. Interrogations usually lasted an hour or more; punishments were often much longer.

After being released from internment camps to go home, former detainees faced further severe restrictions on their human rights, particularly their freedom of movement. Nearly all former detainees who spoke to Amnesty were required to continue their “education” and to attend classes in Chinese language and political ideology after they were released. They were also forced to publicly “confess” their “crimes” at flag-raising ceremonies.

All former detainees Amnesty International interviewed said they were placed under both electronic and in-person surveillance and subjected to regular evaluations from government employees and cadres. Nearly all former detainees reported that government employees or cadres were required to stay with them in their homes for several nights per month after they were released from a camp.

Muslims living in Xinjiang cannot practise their religion. Former detainees and other people interviewed by Amnesty International who lived in Xinjiang between 2017 and early 2021 also described an environment that was extraordinarily hostile to the practice of Islam. By the time these individuals left China, none felt comfortable displaying any signs of religious practice and all believed doing so would result in them being detained and sent to a camp.

According to the evidence Amnesty International has gathered, corroborated by other reliable sources, members of predominantly Muslim ethnic minorities in Xinjiang have been subjected to an attack meeting all the contextual elements of crimes against humanity under international law. The evidence Amnesty has seen therefore provides a factual basis for the conclusion that the perpetrators, acting on behalf of the Chinese state, have carried out a widespread and systematic attack consisting of a planned, massive, organized, and systematic pattern of serious violations directed at the civilian population in Xinjiang.

Amnesty International believes the evidence it has collected provides a factual basis for the conclusion that the Chinese government has committed at least the following crimes against humanity: imprisonment or other severe deprivation of physical liberty in violation of fundamental rules of international law; torture; and persecution.

The Chinese government must immediately release everyone arbitrarily detained and reunite them with their families. Add your name to the petition calling on the Chinese authorities to act.

Downloads
"Like we were enemies in a war" - Report on repression of Muslims in China.