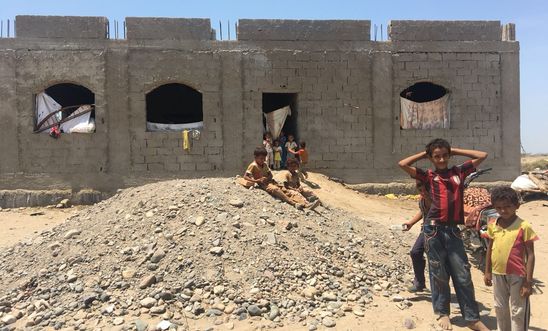 Yemeni civilians are struggling to stay alive amid fierce ground and air attacks in the raging battle to retake western coastal governorates from the Huthi armed group, Amnesty International said today (17 May), after carrying out an investigation in the south of the country.

Civilians from Zabid, al-Jarrahi, Hays and al-Khawkhah - around 60-90 miles south of Hodeidah city - told Amnesty how they and many others had fled to Aden in the south of the country as fighting intensified. Some wept as they spoke of relatives and loved ones killed in the conflict.

Displaced civilians have described an exodus as the fighting has intensified, and according to the UN, clashes along Yemen’s western coast have displaced around 100,000 people in recent months, most of them from Hodeidah Governorate

Amnesty interviewed 34 civilians who had arrived in Aden after clashes displaced them from several villages and towns in Hodeidah Governorate between January and early May this year. They spoke of terrifying mortar attacks, air strikes and landmines amid the new offensive, as forces loyal to the internationally-recognised Yemeni government - supported by ground troops and air cover from the Saudi Arabia-led coalition - attempt to defeatHuthi forces.

Survivors have also said that Saudi-led coalition airstrikes had killed civilians, leaving them in constant fear for their lives.

“We left because of the bombardment and the war around us. They would fire mortars over our head. Every day people would die, every day we would see ripped bodies around us, blown to smithereens. Can we stay there? We had to leave to escape alive. We couldn’t live in such danger.”

Even after they escaped the fighting, some civilians continued to receive crushing news of loved ones killed or injured back home. A woman from Qataba managed to escape to safety in Fuqum, on the outskirts of Aden, but other family members did not. She told Amnesty how a relative who stayed in Qataba broke the news that her seven-year-old nephew was killed on 6 May when a suspected mortar hit a shop where he was buying food. He and his father had stayed behind because they couldn’t afford the cost of fleeing the fighting.

Those displaced in recent weeks said the battle lines are constantly shifting as government and Huthi forces take control of different areas. Civilians caught in the middle face a range of violations of international humanitarian law by both sides.

Huthi fighters have repeatedly fired mortars - which are notoriously imprecise - into civilian areas. According to one man from Hays, a mortar hit a hospital courtyard on 25 March, injuring his 13-year-old son and killing a pharmacist and a nurse. The use of mortars in the vicinity of concentrations of civilians violates the prohibition on indiscriminate attacks.

Meanwhile, Huthi forces have also endangered civilians by basing troops and vehicles in civilian neighbourhoods. They have also allegedly mined roads and otherwise prevented civilians from leaving. In other cases, they’ve expelled people from their homes in areas recently taken from government control.
Meanwhile, a woman from al-Jarrahi told Amnesty how Huthi forces have also forcibly recruited civilian men and boys, including her 13-year-old brother.

“The most vulnerable among the civilian population are bearing the brunt of this new offensive in Yemen’s war.

“The human impact of this fresh military offensive on Yemen’s western coastal areas is clear in the distressing stories shared by civilians displaced by the conflict. It is a glimpse of what potentially lies in store on a wider scale if the fighting encroaches on the densely-populated port city of Hodeidah.

“We are very worried about what appear to be indiscriminate attacks and other violations of international humanitarian law. All parties have an obligation to do their utmost to protect civilians. They are putting the lives and livelihoods of hundreds of thousands more at risk.”

Forced to pay large sums to flee along mined roads

Fleeing the fighting has been costly for those who could actually afford it. The vast majority of those Amnesty spoke to said they could only fund the trip by selling precious belongings, such as wedding rings, property deeds and livestock. They left on private buses and trucks, paying an average of 10,000 riyals (around £22 per person, a large amount in the local economy). In some cases, large families paid up to 150,000 riyals to escape.

Meanwhile, several people told Amnesty about how they had attempted to leave Hodeidah Governorate up to three times before finally succeeding. Huthi forces allegedly branded some civilians “terrorists” for abandoning their towns and villages, and in other cases people said they were aware of Huthis forcing busloads of fleeing civilians to turn back.

Mined roads, Huthi checkpoints and other hazards meant that, for some, what should be a six-hour drive to Aden became a terrifying ordeal lasting up to three days. Buses carrying fleeing civilians were blown up by landmines allegedly planted by the Huthis in a bid to prevent government forces from advancing, and two people said they saw severed body parts along the route. A farmer interviewed in a hospital where his daughter is in intensive care said that as he was escaping with his eight children and other family members during the first week of May, they drove over a landmine that severely injured his 13-year-old daughter and killed his wife’s grandmother. Landmines are inherently indiscriminate and are banned under international law

One woman said she had a miscarriage as soon as she arrived in Aden, which she attributed to the fear and exhaustion caused by the journey.  A 25-year-old woman from Qataba said she was so terrified that she covered her eyes for almost the entire trip and did not breastfeed her baby for more than 13 hours on the last leg of the journey:

“It was really a difficult trip. By God we suffered. There were rockets flying above us. Someone would stop us and say there are projectiles, and then someone else would stop us and say there are landmines, and we would just scream. All the way from when we left and until we arrived we were screaming and crying. We saw dead bodies and we saw others ripped to pieces. We left not thinking we would survive. We thought we would surely die… [but] by the end of it we hoped we died instead of going through what we went through.”

She managed to bring her two daughters - aged nine months and four - with her, but in the chaos of the clashes she left her mother and her seven-year-old son behind in Qataba. Another woman from Hays told Amnesty:

“We were hoping the war would end, but it only got worse. The bombardment became heavier. It became so random. Bullets would land every which way, between the homes, just randomly. We would try to hide the children by the wall … We would hide my mother and the children under the beds. The children would cry. Even at night we couldn’t get any sleep.”

Lack of shelter for IDPs

In the absence of formal camps for internally-displaced persons, many of the displaced civilians interviewed by Amnesty in Aden have sought makeshift shelter in precarious settings, including buildings under construction or crumbling structures that were badly damaged in a previous round of fighting between Huthis and government forces in Aden in 2015.